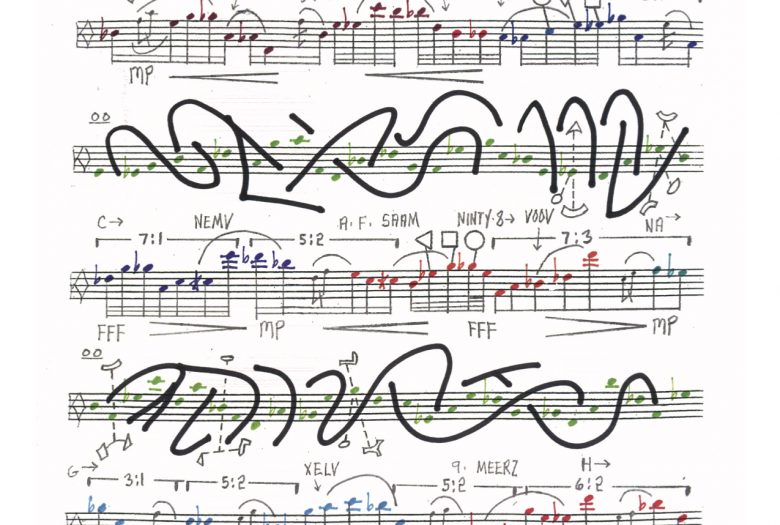 The 11-person Tri-Centric Vocal Ensemble perform works from Anthony Braxton’s Syntactical Ghost Trance Music system—demonstrating the unique sonic tapestry of the compositions and the possibilities of the vocal choir—in celebration of the release of GTM (Syntax) 2017: an album documenting all twelve compositions of his system recorded under the guidance of Anthony Braxton himself.

The evening closes with a performance of another Braxton music system: Echo Echo Mirror House Music, by the duo of Carl Testa on electronics and Cory Smythe on piano.

The Tri-Centric Foundation is a not-for-profit organization that supports the ongoing work and legacy of Anthony Braxton while also cultivating and inspiring the next generation of creative artists to pursue their own visions with the kind of idealism and integrity Braxton has demonstrated throughout his distinguished career. This event is part of Braxton75, an initiative of the Tri-Centric Foundation leading up to the composer’s 75th birthday in 2020, funded in part by the Robert D. Bielecki Foundation.

Carl Testa (b. 1984, Chicago, IL) is a multi-instrumentalist and composer at the intersection of improvised, electronic, experimental music, and new media. As a performer/improviser, he is equally comfortable on string bass, electronics, lighting, and combinations thereof. As a composer, he has written acoustic and electronic music for configurations ranging from solo to chamber orchestra, including multimedia pieces that incorporate electronics, lighting, dance, and theater. His work has been performed throughout the US and Europe, and is documented on many recordings, most recently “Iris (for solo bass and electronics)” (Lockstep Records 2013), and “Sⁿ (for prepared guitar and electronics)”, a collaboration with guitarist Christopher Riggs (Gold Bolus Records 2015).
In addition to his work as a leader/collaborator, he performs regularly with composers Anthony Braxton, Mario Pavone, and Tyshawn Sorey. He serves as the Director of Publishing and Creative Technology for Braxton’s Tri-Centric Foundation where he manages all facets of the production of digital and print scores for the organization. He is the production manager for noted jazz venue and record label Firehouse 12. He also organized The Uncertainty Music Series from 2007-2017, which was a monthly concert series in New Haven, CT featuring improvised, electronic, and experimental music. He has received support from the State of CT as a 2018 Artist Fellow, from the New Haven Department of Cultural Affairs, and from NewMusicUSA. He lives in New Haven with his wife, vocalist Anne Rhodes, and their son, Florian.

Pianist Cory Smythe has worked closely with pioneering artists in new, improvisatory, and classical music, including saxophonist-composer Steve Lehman, violinist Hilary Hahn, and multidisciplinary composers from Anthony Braxton to Zosha Di Castri. His own music “dissolves the lines between composition and improvisation with rigor” (Chicago Reader), and his first record was praised by Jason Moran as “hands down one of the best solo recordings I’ve ever heard.” Smythe has been featured at the Newport Jazz, Wien Modern, Nordic Music Days, Approximation, Concorso Busoni, and Darmstadt festivals, as well as at Lincoln Center’s Mostly Mozart festival, where he was recently invited to premiere new work created in collaboration with Peter Evans and Craig Taborn. He has received commissions from Milwaukee’s Present Music, the Banff Centre for the Arts, the International Contemporary Ensemble, of which he is a longtime member, and the Shifting Foundation, which supported his 2018 release on the Pyroclastic label (and first album as a bandleader), Circulate Susanna. Smythe received a Grammy award for his work with Ms. Hahn and plays regularly in the critically acclaimed Tyshawn Sorey Trio