The TEAM Presents: Primer for a Failed Superpower 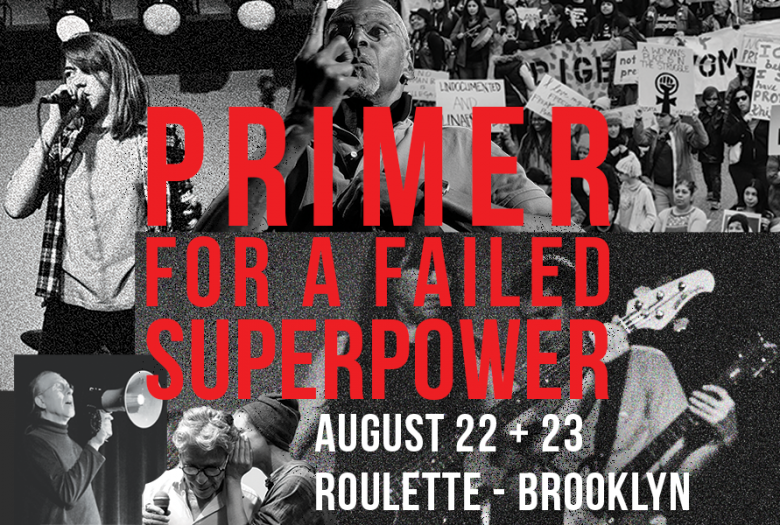 The TEAM Presents: Primer for a Failed Superpower

Fresh takes on iconic protest songs from past and present performed by a multigenerational ensemble of teens, 30-somethings, and Baby Boomers.

Award-winning, Brooklyn-based ensemble The TEAM presents PRIMER FOR A FAILED SUPERPOWER, a concert featuring a band of teenagers, the TEAM, and Baby Boomers playing new and unexpected arrangements of iconic protest songs. Songs that have celebrated and questioned what it means to be an American from the past to the present. Songs that exercise the muscles in our hearts and lungs for the challenges ahead.

Collaborating composers include Heather Christian (Mission Drift), Justin Ellington (Fetch Clay Make Man), Jack Fuller (Ruse, Blown Away), Orion Stephanie Johnstone (I’ll Never Love Again), Amy León (Something Melancholy), Martha Redbone & Aaron Whitby (Bone Hill), Stew & Heidi Rodewald (Passing Strange), and Yva Las Vegass (I Was Born In A Place Of Sunshine And The Smell Of Ripe Mangoes). The three- generation band includes performers and musicians from across New York City and as far away as Texas–some veteran performers, and some taking the stage for the first time. The concert will also feature video interviews with activists from across the country–from an indigenous youth water protector at Standing Rock, to one of the co- chairs of the Women’s March on Washington, to a coal-country cultural worker in Virginia.

The TEAM is a Brooklyn-based theatre ensemble dedicated to creating new work about the experience of living in America today. Since 2004, the ensemble has created 10 original and award-winning pieces of theatre, which have been seen at venues including the Public Theater and PS122 in New York, Boston’s A.R.T., the Walker Art Center in Minneapolis, Virginia Tech, London’s National Theatre and Royal Court Theatre, and at festivals throughout the UK, Europe, Australia and Hong Kong.

Tickets are pay what you are able – no one will be turned away for lack of funds. Advance tickets start at $10. The concert is open to all ages. 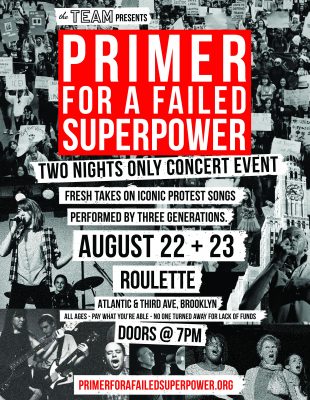