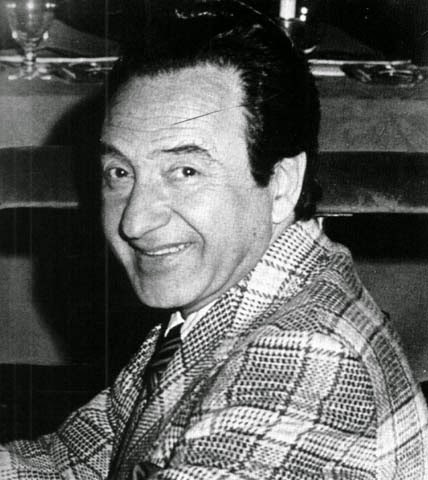 In commemoration of the 10th anniversary of Dennis Sandole’s passing, TVoP (a phrase from the Sandole lexicon) will be an evening of performances by a selection of artists who studied with the Maestro. Above all else, Dennis stressed creativity and individuality – some of his past students include John Coltrane, James Moody, Pat Martino, Rufus Harley, Randy Brecker and Sumi Tonooka. With this in mind, this evening has been curated by composer/ guitarist David First with the intention of demonstrating the length and breadth of Dennis’s inspiration and influence on some of the most important and forward thinking musicians of the past 50+ years.

Denise Sandole is thrilled to have this opportunity to pay tribute to Dennis Sandole: gifted musician/composer, devoted teacher, and most of all, loving father. Not only does Denise share Dennis’ name, she shares his passion for music, as well as for mentoring the development of awareness, balance, and pursuit of happiness within others. Denise has been singing and performing her whole life, always with her Dad proudly watching from the audience. She is graduating this May with her doctoral degree in psychology, one of the many opportunities supported by her Dad. Her father’s legacy as compassionate and nurturing teacher inspires her work as a psychologist every day.

Denise would like to thank her father’s students for keeping his memory alive through their own work, mentoring of others, and continued devotion to his teachings and spirit. She is especially grateful to the Curator, David First, for eagerly responding to her post back in February about her tribute fantasy and for making it a reality. And to Bruce Eisenbeil for serving as Ambassador at Large by representing the spirit of Sandole.

Ian Ash is from Philadelphia, PA. and studied with Dennis Sandole from 1992-
2000. During this time, Ian learned to apply Dennis’ theory to mallet instruments and
rhythmic theory on drum set. He continues to develop and expand Dennis’ theories in
order to develop his own musical identity. Ian has played and recorded with a variety
of artist including Sonny Fortune, Blues Man Sonny Rhoades, Christian McBride, Elio
Villafranca, Randy Brecker, Violinist John Blake, Drummer Jonathan Blake, and Bruce
Eisenbeil. Ian was invited to perform at the Boise Experimental Music Festival and
Washington D.C. Sonic Circuits festival with his band, The Deep End Ensemble which
featured Bruce Eisenbeil on guitar and Wilbo Wright on bass. The Deep End Ensemble’s
music is based on developments from Dennis’ theory.

Bruce Eisenbeil has dedicated his life to the development of modern guitar through the
growth and evolution of cutting edge composed and improvised music. He studied with
Dennis Sandole from 1987-2000 and assisted in the 1999 release of Sandole’s guitar
quartet and Jazz Ballet Opera on the Cadence label. Eisenbeil’s twelve CD’s of original
music have been released on a variety of labels including: ESP, Pogus, Nemu, Konnex,
Cadence, C.I.M.P and Nine Winds. Eisenbeil has performed and recorded with some of
the best musicians in the world including Cecil Taylor, David Murray, Milford Graves,
Perry Robinson and Tom Hamilton. He has performed throughout the USA, Canada,
Japan, Switzerland, France, Sweden, Denmark, Germany, Brasil and at many festivals
including the New Languages Festival, Boise Experimental Music Festival, Edgefest,
Montreal Jazz Festival, The Vision Festival, Texaco New York Jazz Festival and the
Philadelphia PSFS-Mellon Jazz Festival. His current trio, TOTEM>, includes Tom
Blancarte and Andrew Drury. Eisenbeil lives in New York City.

David First studied with Dennis Sandole from 1972 – 74. His musical life since has been
filled with opposites and extremes. As a performer he has played in raucous drunken bar
bands and in pin-drop quiet concert halls with classical ensembles. As a composer First has
created everything from finely crafted pop songs to long, severely minimalist drone-works.
His performances often find him sitting trance-like without seeming to move a muscle, unless he is playing with his psychedelic rock & roll band, Notekillers, at which time he is a whirling blur of hyperactive energy. First has been called “a fascinating artist with a singular
technique” in The New York Times, and “a bizarre cross between Hendrix and La Monte
Young” in The Village Voice. He has received grants from the Foundation of Contemporary
Performance Arts, the National Endowment for the Arts, the Copland Foundation, the Mary
Flagler Cary Charitable Trust and the Meet the Composer Commissioning USA program.

Brian Groder, composer/trumpeter’s music is not limited to a single jazz tradition; he
draws on the entire rich history of the last hundred years to create music which freely
combines composition and improvisation. His unique approach to jazz composition was
the subject of a recent Downbeat profile, in March, 2010. The latest free jazz CD that he
released with legendary pianist Burton Green, Groder and Green, on Latham Records,
was called “Best Release of 2009” by All About Jazz. His CD Torque, with the legendary
Sam Rivers, was named by Downbeat as one of the Best Jazz CDs of 2007, and has
received recognition around the world as “stimulating, fresh jazz with an eye to the future
but a strong awareness of the past.” (Jazz Journal International).

With his unique and recognizable style, pianist Matthew Shipp worked and recorded
vigorously during the 1990s, creating music in which free jazz and modern classical
intertwine. He first became known in the early ’90s as the pianist in the David S.
Ware Quartet, and soon began leading his own dates — most often including Ware
bandmate and leading bassist William Parker — and recording a number of duets with a
variety of musicians, from the legendary Roscoe Mitchell to violinist Mat Maneri, who
began appearing on recordings in the 1990s. Through his range of live and recorded
performances and unswerving individual development, Shipp came to be regarded as
a prolific and respected voice in creative music by the decade’s close. Shipp moved to
N.Y.C. in 1984 and soon met bassist William Parker, among others. Both were playing
with tenor saxophonist Ware by 1989. Meanwhile, Shipp had debuted as a recording
artist in a duo with alto player Rob Brown on Sonic Explorations, recorded in November
1987 and February 1988. Shipp married singer Delia Scaife around 1990. He then went
on to lead his own trio with Parker and drummers Whit Dickey and Susie Ibarra. Shipp
has led dates for a number of labels, including FMP, No More, Eremite, Thirsty Ear,
Silkheart, and more.

Dylan Taylor studied bass with Al Stauffer, Dennis Sandole (from about 1983-1990),
Buster Williams (under an NEA Jazz study Fellowship) and John Pattitucci. Dylan has
played on the Philly area jazz scene for many years, sharing the stage with some of the
Jazz greats such as Larry Coryell, Lee Konitz, Freddie Hubbard and Mose Allison. He
also worked with the Tom Lawton Trio at the Philadelphia Four Seasons Hotel and the
Tony Williams Quartet at The Ritz-Carlton Hotel. Dylan has recorded with Heath Allen;
The Butch Ballard Trio; Khan Jamal, (on C.I.M.P. label) Kelly Meashey (on C.I.M.P.
label) and Bobby Zankel (on Dreambox Media and C.I. M.P.).

Writing in the Boston Phoenix, author Norman Weinstein (“A Night in Tunisia”)
declared that “Bobby Zankel deserves any Talent Deserving Wider Recognition
Award that the jazz press might offer”. In reviewing “Emerging From The Earth”,
the Jazz Times wrote,” He’s headed to status as a prime jazz innovator.” Since
1975 his performances as a sideman have ranged from the Hank Mobley/
Sonny Gillete Quintet, to Jymmie Merritt’s Forerunners, to the Dells, NRBQ,
Odean Pope’s Saxophone Choir, Ruth Naomi Floyd, and European work with
Taylor. Zankel’s intensive studies of tonality and rhythms with Maestro Dennis
Sandole have lead to his development into one of the most brilliant and original
composers of the 90’s. His alto playing has been described as a unique amalgam
of the precision and rhythmic intricacy of be-bop, with the soul and drive of hard
bop, and the fire, spirituality, creativity and intensity of the avant garde. Zankel’s
tenure in Philadelphia has been marked by a series of acclaimed collaborations
with choreographers, writers, and visual artists (funded by a variety of grants,
and commissions), four that have resulted in three ballets and one opera.
In 1995 he was honored to receive the prestigious PEW FELLOWSHIP (the
largest monetary grant that one can apply for in the US) for his writing. Zankel’s
compositions, which are characterized by a stunning blend of rhythmic layers,
a highly personal, complex, chromatic harmonic language, and a hauntingly
beautiful melodic lyricism, have been performed by such diverse musicians
as Johnny Coles, Odean Pope, Jamaaladeen Tacuma, Lester Bowie, Marilyn
Crispell, Ralph Peterson Jr.