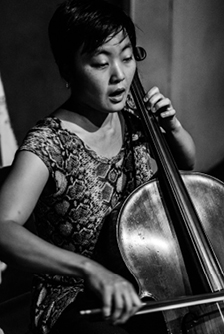 Inspired by the Disasters of War etchings of Francisco Goya, The Unlearning is a collection of 21 captivating songs for violin, cello and two voices composed by cellist/vocalist Theresa Wong. Performed in duo with the extraordinary violinist/vocalist Carla Kihlstedt (Tin Hat, Rabbit Rabbit, Sleepytime Gorilla Museum) this intimate and unique work, which has been hailed by Fred Frith as “a masterpiece exquisitely realized,” is a fierce serenade blending folk, noise, lyricism, humor and irony: aural meditations that invite the listener to contemplate on violence and the enigma of war in today’s topsy-turvy world. This performance will feature newly commissioned visual projections by renowned filmmakers Daria Martin and Mao Mollona.

“I ended totally convinced by the sheer warmth and humanity of this project… this is an album bursting with ideas and moving at a lick” –Clive Bell, The Wire (UK)

Theresa Wong is a composer, cellist and vocalist actively exploring the intersection where music meets with the creative spirit of experimentation, improvisation and the synergy of multiple disciplines. Bridging areas of music, dance, theater and visual art, her recent works include The Unlearning, a debut album released to critical acclaim on Tzadik records and O Sleep, an improvised opera she directed exploring the conundrum of sleep and dream life. Wong has collaborated with many singular artists, including Fred Frith, Ellen Fullman, Luciano Chessa, Annie Lewandowski, Søren Kjærgaard, ROVA Saxophone Quartet and dance pioneer Anna Halprin.  She is currently based in Berkeley, California.
theresawong.org

When violinist/singer Carla Kihlstedt performs, it’s hard to know what force of nature has hit you. With complete abandon, crystalline precision and a voracious appetite for crossing musical boundaries, she has left a distinct mark in the folk/pop, contemporary classical, improvised and experimental music worlds. She is a founding member of Sleepytime Gorilla Museum, Rabbit Rabbit and Tin Hat and her collaborations include: Tom Waits, Fred Frith, Mr. Bungle, Tracy Chapman and Madeleine Peyroux.
www.carlakihlstedt.com

The worlds of filmmaker Daria Martin are like cabinets of wonders filled with luminous colors, cryptic riddles and fantasies of past avant-gardes. Her 16mm films dance the line between painting and performance, people and objects and internal and social worlds. She has had solo exhibitions at:
New Museum New York, Museum of Contemporary Art Chicago, Kunsthalle Zurich and Australian Centre for Contemporary Art Melbourne among others.
dariamartin.com

Anthropologist Mao Mollona uniquely stitches together the arenas of political and economic anthropology with experimental filmmaking. His provocative inquiries delve into the use of film as a tool for political intervention and reflection. He has published and lectured at Raven Row, GasWorks, Steirischer Herbst festival Graz, Il Festival della Filosofia in Modena and currently teaches at Goldsmiths College in London.
gold.ac.uk/anthropology/staff/m-mollona