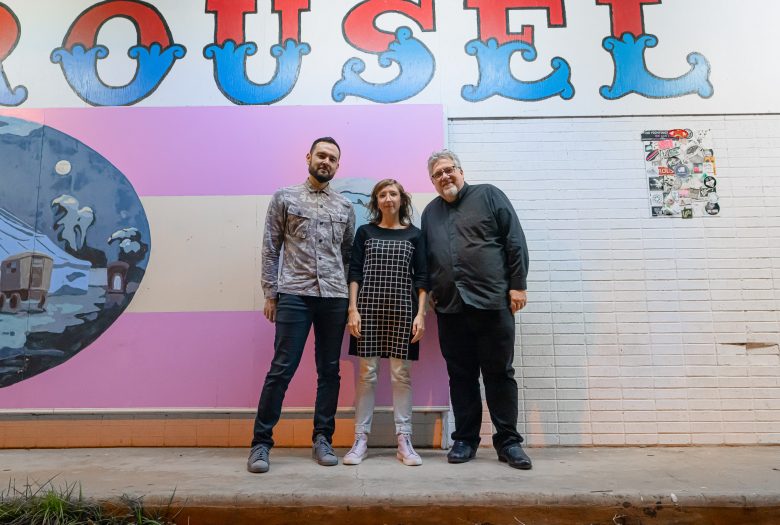 The collective trio will present new music from their forthcoming album, Never is Enough, plus a selection of tunes from their latest release, The Anthony Braxton Project, mixed in with other originals and covers developed over the past nine years of playing music together. Please tune in and celebrate Mary’s 40th birthday with us!

The trio Thumbscrew came about by accident after bassist Michael Formanek subbed in a band including guitarist Mary Halvorson and drummer Tomas Fujiwara back in 2011. Something special happened among them right away, so they formed a trio, a co-operative in the truest sense. They play originals by all hands, compositions whose rhythms may surge or lag or veer sideways according to their own internal logic. Bass and drums solo within the ensemble, not in quarantine. No one needs to be loudest. The blend is tight: one string (or metal) sound may bleed into another. It’s something to hear—something twisty and turny and always on the move. The band has released five albums to date, all on Cuneiform Records: The Anthony Braxton Project (2020), Ours and Theirs (2018), Convallaria (2016), and Thumbscrew (2014). Their sixth album Never is Enough, is coming in February 2021.

“Made up of three highly distinctive voices in the world of jazz and avantgarde music, Thumbscrew should probably collapse under the weight of its own star power but Tomas Fujiwara (drums), Mary Halvorson (electric guitar) and Michael Formanek (acoustic bass) are just too aware of the potential of this supertrio to let that happen.”

—S. Victor Aaron, Something Else!

Brooklyn-based drummer and composer Tomas Fujiwara is an active player in some of the most exciting music of the current generation, with his bands Tomas Fujiwara & The Hook Up, 7 Poets Trio, and Triple Double whose debut was on over 20 Best-of-2017 lists including ones by NPR, The Village Voice, and All About Jazz; his collaborative duo with cornetist Taylor Ho Bynum; the collective trio Thumbscrew (with Mary Halvorson and Michael Formanek); and a diversity of creative work with Anthony Braxton, John Zorn, Matana Roberts, Joe Morris, Nicole Mitchell, Ben Goldberg, Tomeka Reid, Amir ElSaffar, and Benoit Delbecq. “Drummer Tomas Fujiwara works with rhythm as a pliable substance, solid but ever shifting. His style is forward-driving but rarely blunt or aggressive, and never random. He has a way of spreading out the center of a pulse while setting up a rigorous scaffolding of restraint…A conception of the drum set as a full-canvas instrument, almost orchestral in its scope.” (The New York Times)

One marker of bassist Michael Formanek‘s creativity and versatility is the range of distinguished musicians of several generations he’s worked with. While still a teenager in the 1970s he toured with drummer Tony Williams and saxophonist Joe Henderson; starting in the ’80s he played long stints with Stan Getz, Gerry Mulligan, Fred Hersch and Freddie Hubbard. The bassist has played a pivotal role on New York’s creative jazz scene going back to the ’90s when he notably led his own quintet and played in Tim Berne’s barnstorming quartet Bloodcount. Nowadays Formanek’s in the co-op Thumbscrew with Brooklyn guitarist Mary Halvorson and drummer Tomas Fujiwara. Formanek is also a composer and leader of various bands. His principal recording and international touring vehicle is his acclaimed quartet with Tim Berne on alto saxophone, Craig Taborn on piano and Gerald Cleaver on drums, which records for ECM; 2010’s The Rub and Spare Change and 2012’s Small Places both earned coveted five-star raves in Down Beat. Formanek writes, and the quartet plays, compositions of great rhythmic sophistication that unfold in a natural sounding way – challenging music the players make sound like lyrical free expression.  His occasional groups include the 18-piece all-star Ensemble Kolossus, roping in many New York improvisers he works with. Ensemble Kolossus recorded their first CD of all Formanek originals, The Distance, for the prestigious ECM label that was released in February of 2016, and received a Five Star review in Downbeat.

Guitarist and composer Mary Halvorson has been described as “a singular talent” (Lloyd Sachs, JazzTimes), ”NYC’s least-predictable improviser” (Howard Mandel, City Arts), “one of the most exciting and original guitarists in jazz—or otherwise” (Steve Dollar, Wall Street Journal), and “one of today’s most formidable bandleaders” (Francis Davis, Village Voice). In recent Downbeat Critics Polls Halvorson has been celebrated as guitarist, rising star jazz artist, and rising star composer of the year, and in 2019 she was awarded a MacArthur Fellowship. Halvorson has released a series of critically acclaimed albums on the Firehouse 12 label, from Dragon’s Head (2008), her trio debut featuring bassist John Hébert and drummer Ches Smith, expanding to a quintet with trumpeter Jonathan Finlayson and alto saxophonist Jon Irabagon on Saturn Sings (2010) and Bending Bridges (2012), a septet with tenor saxophonist Ingrid Laubrock and trombonist Jacob Garchik on Illusionary Sea (2014), and finally an octet with pedal steel guitarist Susan Alcorn on Away With You (2016). She also released the solo recording Meltframe (2015), and most recently debuted her song project Code Girl (2018). One of New York City’s most in-demand guitarists, over the past decade Halvorson has worked with such diverse musicians as Tim Berne, Anthony Braxton, Taylor Ho Bynum, John Dieterich, Trevor Dunn, Bill Frisell, Ingrid Laubrock, Jason Moran, Joe Morris, Tom Rainey, Jessica Pavone, Tomeka Reid, Marc Ribot and John Zorn. She is also part of several collaborative projects, most notably the longstanding trio Thumbscrew with Michael Formanek on bass and Tomas Fujiwara on drums.