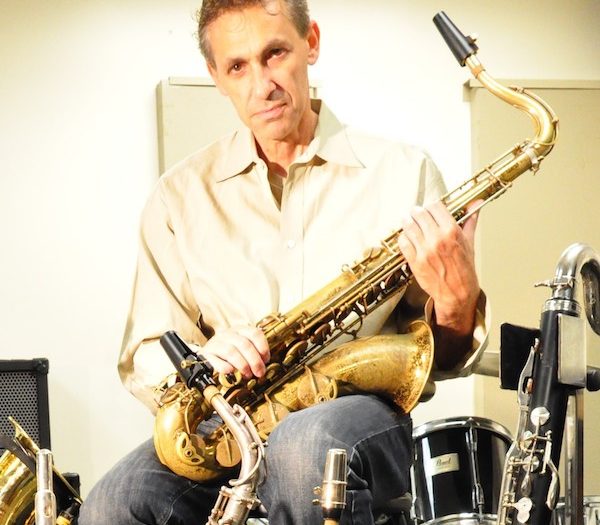 Pink Noise Saxophone Quartet: From impressionistic harmonies in ‘Fish Eats Dog’ (based on a true story), to the glory of the ‘Martian National Anthem’ and beyond, the group presents new compositions and improvisations inspired by myth, implausible grooves and the blues. With Tim Otto, Peck Allmond, Michael Blake and Andy Laster on mixed saxophones and clarinets.

From a review in The Jig Is Up:
New York City’s Pink Noise Saxophone Quartet is led by Australian tenor and soprano saxophonist Tim Otto , who has also performed with Myth Science , Joe Gallant , and the Virgil Moorefield Ensemble. Otto formed the quartet in 1994, applying the “Pink Noise” name to the group in a reference to both the lush harmonies of combined saxophones and the abrasiveness of low frequency static. Far from abrasive, however, the PNSQ juxtaposes street marches, funk, freewheeling jazz, blues, and Middle Eastern music, performing pieces with both solo and collective improvising as well as adventurous ensemble writing. The original quartet included Peck Allmond — an alto and tenor saxophonist from the San Francisco Bay area who has also played with Don Cherry , Peter Apfelbaum and the Julius Hemphill Sextet — Norman Salant, and Blaise Siwula in addition to Otto . During the late ’90s, the quartet went through a number of personnel changes, always retaining Otto in the driver’s seat while evolving into a unit characterized by rigorous compositions and arrangements in addition to free-blowing improvisation.