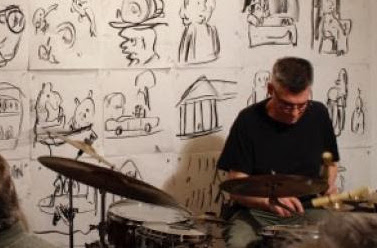 For Roulette’s first-ever CHILDREN’S CONCERT, Tim Spelios and the Theodor Geisel Temporary Quartet present a music- and fun-filled afternoon of wacky and playful sounds, instruments, images and readings for students in Pre-K through third grade. The hour-long interactive and participatory concert will include projected images from Seuss’s classic, Green Eggs and Ham, with a live reading and musical accompaniment. The group also will play ‘three-chord garage songs’ and nursery rhymes using new and unusual instrumentation, ranging from strings and percussion to invented sound-making devices and a squeeze box (accordion-like instrument.) In addition to the music, Matt Freedman will perform speed-drawing, creating stories featuring the likes of cartoon characters Nancy & Sluggo.

Tim Spelios is a renowned New York City-based sound and multi-media artist. As a musician, Tim has recorded and performed internationally at venues such as PS122, Creative Time, PS1 Radio and the Knitting Factory and has toured extensively with his ensemble of electronic musicians, Impossible Music. As an artist, his work has been shown in solo and group shows at Rosa Esman Gallery, Sarah Bowen Gallery, The Drawing Center and Long Island University, among many others. His music and artwork have been reviewed widely in publications such as the New York Times, the Village Voice and Art in America. He has held professorships in art at the University of Illinois and taught art and woodshop at New York City’s Allen Stevenson School to grades K through 9.