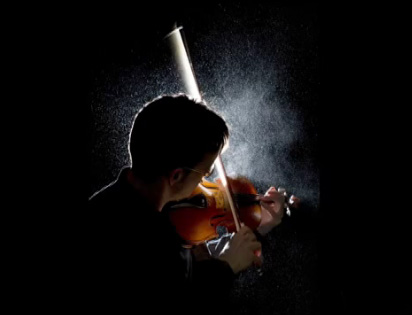 Lately violinist/composer Tom Swafford has felt adrift in a sea of musical genres, each one with its own set of aesthetic criteria and performance practice. Tom has reached the point where he wants to define exactly what his compositional voice is. This concert uses this well-worn cliché (The Real Me) as a unifying theme for the variety of his compositions presented.

The centerpiece of the concert, This is the Real Me, a distilled opera written for vocalist/performer Gelsey Bell, addresses the issue of not just musical but personal self-definition through extended vocal techniques, a variety of musical styles, facial expressions and physical gestures. The text of Your (so called) Music (for spoken word artist Lee Todd Lacks and 12 piece string orchestra) is a vitriolic piece of hate mail Tom received after his last composition concert. Hecklepiece, for solo performer and hecklers, deals with some of the issues faced by musicians and composers-for-hire who must tailor their art to the demands of others. In this concert, Swafford is asking: “When given absolute freedom to create the music I want, without being subject to anyone else’s aesthetic criteria, what would that music be?” Also on the program is music for woodwind quintet, solo piano, banjo and string orchestra.

Tom Swafford is a New York based violinist and composer active in a wide variety of genres. He performs with his 12 piece group String Power, rock band Emanuel and the Fear and Cajun/country band Potbelly Gumbo, freelances in various groups and busks in the NYC subways. Tom grew up in Seattle where his musical parents encouraged him to start violin and piano at an early age. He played in orchestras, jazz and rock bands in middle and high school. He attended Tufts University where he majored in music and clinical psychology and studied composition with John McDonald. He received a PhD in music composition from the University of California, Berkeley where his principal teacher was Olly Wilson. He then studied in Amsterdam for a year with Louis Andriessen. He returned to Seattle in 2002 where he soon joined up with Seattle’s vibrant experimental music community and worked with Wayne Horvitz, Stuart Dempster and many others. He also began busking at Pike Place Market and joined the Irish punk band Meisce. He moved to New York in March 2007. Tom received a Charles Ives Prize from the American Academy of Arts and Letters in 2001 and an Eisner Prize (1998) and Hertz Traveling Fellowship (2001) from the University of California Berkeley. He has received grants and awards from 4Culture, Jack Straw Foundation and CityArtist.