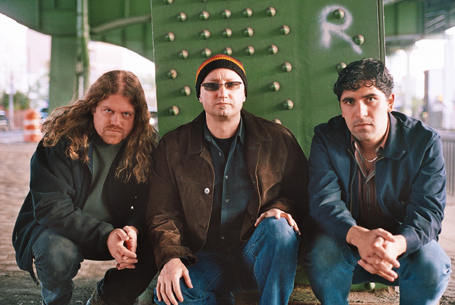 Totem is a noise rock free improvisation trio that ventures from walls of sound to exploring microscopic sound worlds. With guitarist Bruce Eisenbeil, bassist Tom Blancarte and drummer Andrew Drury this trio makes music that is fresh, energetic and at the frontiers of understanding. TOTEM has been influenced by paradoxes and extremes, adverse circumstances and technology – both primitive and futuristic.
This trio just returned from doing concerts in France and Switzerland. The famous jazz label ESP will release TOTEM’s debut CD on June 10.
The CD is titled SOLAR FORGE.

Bruce Eisenbeil is a composer, improviser, and guitar instrumentalist who has dedicated his life to the advancement of modern guitar techniques through the growth and evolution of modern improvised music. He has seven CD’s released and has performed throughout the USA, Canada, Japan, Switzerland, France, Sweden, Denmark, Germany, Brasil, and at many festivals. Eisenbeil has performed, recorded and collaborated with some of the best musicians in the world.

Although Eisenbeil was born in Chicago, he grew up in Plainfield, NJ which is where he began playing the guitar when he was 4 years old. He has been performing professionally since he was 15. Mostly self-taught, he studied with a few great teachers including Joe Pass, Howard Roberts, Joe Diorio, and Dennis Sandole (teacher of John Coltrane and Pat Martino). Eisenbeil has been living in New York City since 1995.

Critics have compared him not only with guitarists such as Wes Montgomery, Django Reinhardt, Grant Green, Billy Bauer, Derek Bailey, Sarnie Garrett, Sonny Sharrock, Curtis Mayfield, John McLaughlin, Jimi Hendrix and Jeff Beck but also with saxophonists John Coltrane and Ornette Coleman and pianists McCoy Tyner and Cecil Taylor. His ensemble writing has been associated with that of Miles Davis, Don Cherry, Brian Ferneyhough, Sun Ra, the Art Ensemble of Chicago and the Revolutionary Ensemble.

TOM BLANCARTE www.myspace.com/tomblancarte Blancarte is a bassist, improviser and composer living and working in New York City. He has performed his music across North America, Europe and Japan. His primary focus is on improvisational music and finding new roles for the bass in a variety of musical contexts.

He is an active performer in a variety of ensembles in the New York area, his most active groups being the hyperactive duo Sparks with trumpeter Peter Evans, Dave Smith’s Who Put The Bad Mouth On Me, and the Peter Evans Quartet. Originally from Austin, Texas, he began playing electric bass as a teenager, falling in love with rock and metal music. He quickly found himself performing in many rock and blues bands in Austin, and soon after heard jazz and the upright bass, which is his primary instrument today. He received a Jazz Studies degree from the University of North Texas, where he studied with Jeff Bradetich and Lynn Seaton.

Blancarte performs regularly in New York City at The Stone and Zebulon with the finest improvisers. Blancarte has toured extensively throughout Europe and has received critical acclaim for his work on the self-titled Peter Evan’s Quartet CD released by Firehouse12 records.

Andrew Drury (percussion/composer) grew up near Seattle (USA), studied with Dave Coleman and Ed Blackwell, and now works primarily in avant-jazz and free improvisation, with regular forays into other genres and media. He has performed in Europe and North America, made four CDs as a bandleader, and appeared on over 20 others. He has played and recorded with Michel Doneda, Mark Dresser, Jason Kao Hwang’s EDGE, Jihae, Eyvind Kang, Mazen Kerbaj, Myra Melford, Reuben Radding, the Rat Race Choir, Jane Rigler, John Tchicai, Nate Wooley, Jack Wright, and more. Drury has received 18 grants for his work (from the NEA, NYSCA, the Puffin Foundation, etc.), and has led over 800 junk percussion workshops in schools, prisons, Indian reservations, homeless shelters, rural villages in Nicaragua and Guatemala, a music academy in Sarajevo, and at the Columbia University School of Social Work. He recently released a solo CD, “Renditions” (Creative Sources), and Cadence will soon release his trio CD, “My Fingers Will Be Your Tears.” His newest projects include junk percussion workshops in Bosnia, a horn and drums quartet (with Peter Evans, Briggan Krauss, and Chris Speed), and a percussion quartet (with Jim Black, Mike Pride, and Michael Sarin). For more information visit www.myspace.com/andrewdrury and www.andrewdrury.com.