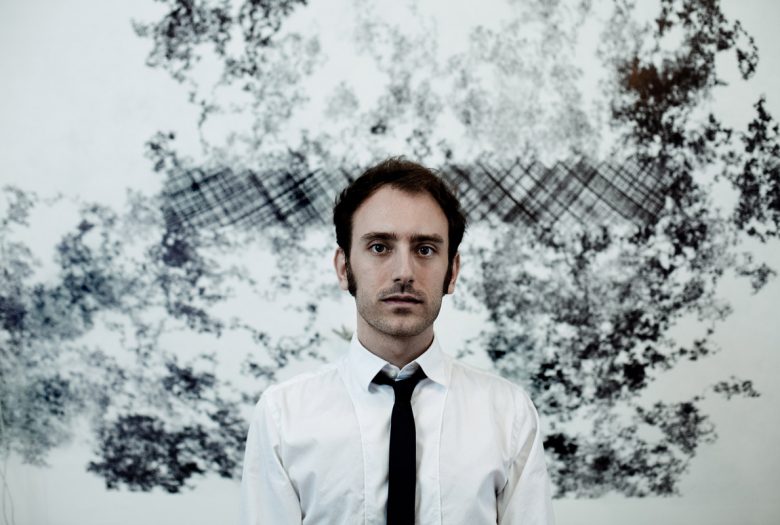 Tristan Perich’s (New York) work is inspired by the aesthetic simplicity of math, physics and code. The WIRE Magazine describes his compositions as “an austere meeting of electronic and organic.” 1-Bit Music, his 2004 release, was the first album ever released as a microchip, programmed to synthesize his electronic composition live. His latest circuit album, 1-Bit Symphony (on Physical Editions) has received critical acclaim, called “sublime” (New York Press), and the Wall Street Journal said “its oscillations have an intense, hypnotic force and a surprising emotional depth.” His award winning work coupling 1-bit electronics with traditional forms in both music (Active Field, Observations) and visual art (Machine Drawings, Microtonal Wall) has been presented around the world, from Sonar and Ars Electronica to the MoMA and bitforms gallery.

On Dec 3 at Roulette, Tristan Perich will be doing an atypical performance of three solo improvisations on piano and 1-bit electronics. The piano was his first instrument, and he am still inspired by its massive physicality, and the directness of its sound-making mechanism, which has informed his work with low-fi electronics. The first set will be a solo piano improvisation. Piano will be followed by a solo improvisation on 1-bit tones using hand built electronics related to his 1-Bit Symphony. Finally: an improvisation of 1-bit noise from his ongoing Noise Patterns project. This will be the first time he has presented a solo program like this, and the first time in seven years since he has performed on the solo piano.

This performance also marks the completion of Perich’s Compositions edition of four recordings packaged with posted-sized scores. The latest release is Active Field, with Ensemble Signal conducted by Brad Lubman (Nov. 20, Physical Editions). Though the Compositions are not heard this evening, they share Perich’s distinctive blend of acoustic and 1-bit sound.