Turning Jewels Into Water: Standing at the End of the World 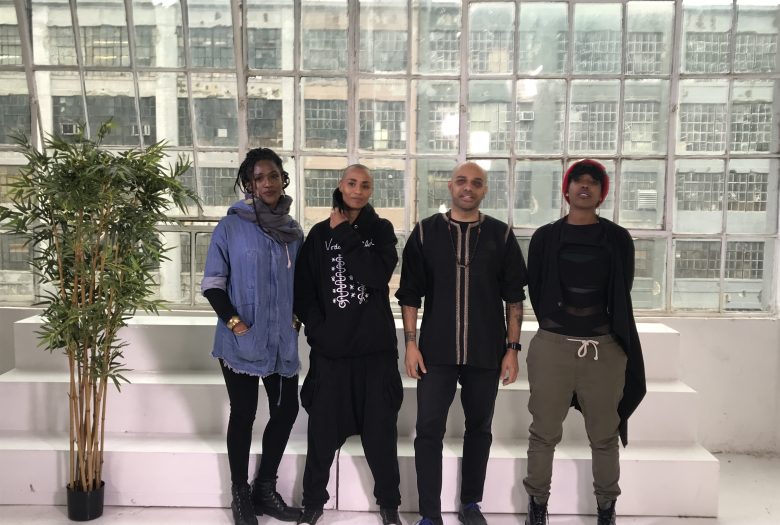 Turning Jewels Into Water: Standing at the End of the World

For this US premiere, Turning Jewels Into Water, the live electronic duo Ravish Momin and Val Jeanty will collaborate with the video artist Art Jones and dancers  Ra Dakini and Ivvy to create an interdisciplinary work that depicts the transformation of an individual facing the impacts of climate change.

Quite often, the current public discourse around climate change puts the responsibility to address change on the individual and not sufficiently on the industrial systems that are primarily responsible. Using multiple dancers and live video elements, we hope to examine how an individual can find solidarity with others to initiate systemic change. We feel that this collaboration comes at a critical time, when we need to address the impacts of climate change and also offer a message of hope and solidarity. The performance will be built around an electronic music framework designed by TJIW and will be divided into three sections. The primary goal is to create a multimedia performance that looks at the causes of climate change, depicts the current consequences on a woman, and finally finds her community rising up in solidarity to create a sustainable future.

This performance will be presented virtually and available for free on a variety of streaming platforms. Our theater is currently closed for public performances as a result of the Covid-19 pandemic and the safety measures that Roulette has put in place to keep staff, artists, and the public safe.

Turning Jewels Into Water began when Jeanty participated in a jam session at Pioneer Works in Brooklyn while Momin was artist-in-residence there in September 2017. Their collaboration, rooted in improvisation, evokes the esoteric realms of the creative subconscious. Drawing from the Vodun religion, Val recreates the ancient rhythms and pulse of Haiti through digital beats, while Momin, whose own musical background is rooted in Indian, North African and Middle-Eastern traditions, has developed an original blend of electro-acoustic beats, drawing together the improvisational traditions in Jazz and Indian folk music. Together, they employ cutting-edge music-technological tools such as acoustic drums outfitted with Sensory Percussion triggers, Force Sensing Resistor (FSR) drum pads and Smart Fabric MIDI Controllers, but still emphasize the ritual aspects of creating music in the digital realm.

Ravish Momin is a versatile percussionist/composer/ electronic musician. He has studied drumset with master-drummer Andrew Cyrille, and has also studied North Indian Classical percussion. Ravish’s love for the sciences simultaneously led him to obtain a B.S. in Civil/Environmental Engineering from Carnegie Mellon University (1994.) He has worked with artists as diverse as pop-star Shakira and legendary saxophonist Maurice McIntyre (early member of the AACM, 1969.) In the past, he led the acclaimed Global/Jazz/Electronic band Tarana on international stages for 14 years and had recorded several albums to critical acclaim. He has also received grants from NewMusic USA, Arts International, Meet The Composer, Chamber Music America and US Artists International. While not on tour he works as a Teaching Artist across NYC with inner-city youth, covering a wide range of subjects such as Snare-drumming, West African and Middle-Eastern percussion, Early Childhood Music and Electronic Music-production.

Val Jeanty is a Haitian electronic music composer/percussionist/turntablist who vokes the musical esoteric realms of the creative subconscious self-defined as “Afro-Electronica.” She incorporates her African Haitian musical traditions into the present and beyond, combining acoustics with electronics and the archaic with the post-modern. She works with a diverse array of artists, including Geri Allen, Anthony Braxton and Harriete Tubman Double trio. She is the recipient of the Van Lier Grant, Meet the Composer Grant, and her project “ON” was supported in part by the New York State Music Fund. Her “Afro-Electronica” installations have been showcased in New York City at the Whitney Museum, the Museum of Modern Art, the Brooklyn Academy of Music, and the Village Vanguard, and internationally at SaalFelden Music Festival in Austria, Stanser Musiktage in Switzerland, Jazz à la Villette in France, and the Biennale Di Venezia Museum in Italy.