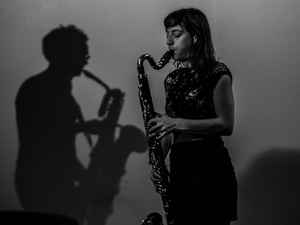 Three electro-acoustic voices: bass clarinet, baritone saxophone and bass guitar mix impressionist motifs, tone clusters, and microtonal drones. Three select motifs are silently looped, while the musical performance plays out. Bleeding into the conclusion, each loop is concurrently transmitted on separate FM stations forming a non-linear, interactive, and spatialized piece created in real time. As the performers shed their assumed roll, they lead the audience members, who will be equipped with handheld radios, in tuning to either of the three stations that are being broadcast on, revealing the layered, static-infused, and distorted motifs. The three separate stations which each loop will be broadcast on will allow the audience to mix the instruments, creating a perpetually mutable sound environment without a defined ending. The idea of “Furniture Music” as conceived by 19th century avant-garde composer and all around ne’er do well Erik Satie, was a re-imagined version of traditional chamber music as a household ornament rather than a temporal event. We expand this notion of live performance to shrink and blur the boundaries between the audience, performers and performance.

TwistyCat is a Brooklyn based improvising duo of amplified Bass Clarinet and Baritone Saxophone. Formed in 2005, TwistyCat has developed an improvised live performance that marries to each individual venue through electro-acoustic feedback and includes expanded cinematic projections by Anastasiya Osipova. In 2008, TwistyCat released Bore Hole, a cassette on Baked Tapes, and the double-disc Megaflora/Megafauna, recorded in the abandoned Widow Jane cement mine.

Lea Bertucci is an interdisciplinary artist based in Brooklyn NY who works with photography, video and sound. She is a 2007 Tierney fellow and has received a degree in photography from Bard College. The emphasis of her work lies in the creative description of space, whether through light, movement or sound.

Ed Bear is a musician and engineer working with found electronics, video, and collective improvisation. He has toured extensively in North America and Europe as a former member of the group Talibam!; performing at major venues such as Issue Project Room, Free103Point9, Tonic, The Montreal Pop Festival, Oberlin Conservatory of Music, and Duke University. As an educator and artist, his workshops aim to technologically empower artists as both scientists and magicians and promote ecologically sound alternatives to modern electrical power systems and electronic devices.