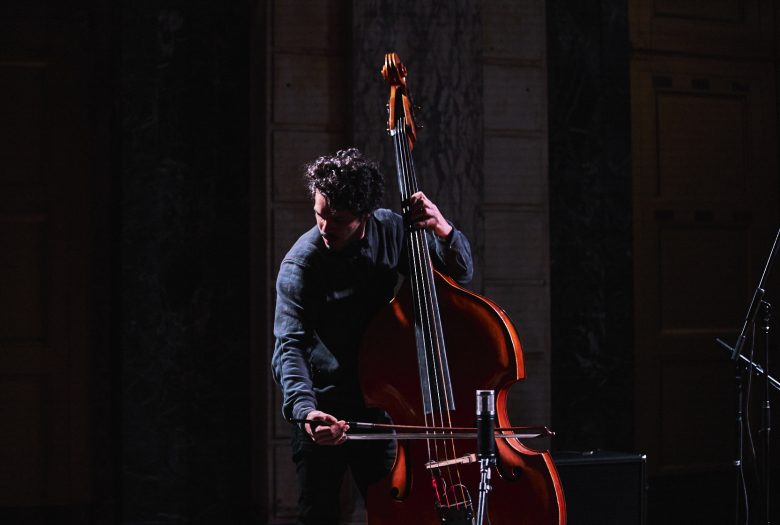 Composed specifically for improvising musicians, Lamentations is named for the Book of Lamentations, though the work itself is secular and harbors no overt meaning. Sam Yulsman and Brandon Lopez will play them first. Followed by the 4tet. Brandon Lopez and Sam Yulsman have been working together since meeting in 2015. The 4tet is a new venture.

Improviser/Composer, Brandon A. Lopez, deemed the “Ubiquitous Free Improv Bass Ace” by the Village Voice and said to play with a “bruising physicality” by the Chicago Reader, was born and raised in the splendors of Northwestern New Jersey, in the shadow of NYC. It was there that he cultivated a taste for the left of center musics and subsequently, dug graves. He’s had the pleasures of working with many of the world’s luminary left of center musicians. Is a frequent collaborator (With Weasel Walter, Mette Rasmussen, Gerald Cleaver, Peter Evans, Ingrid Laubrock, Dave Rempis and many others) and has toured and played prestigious halls, DIY basements, festivals all across North America and the European Continent. He’s currently leads a piano trio dubbed “Mess” with Sam Yulsman and Chris Corsano. He frequently plays solo. He is also the 2018 Artist-in-Residence at Issue Project Room and was awarded the Van Lier Fellowship through Roulette this same year. He attended New England Conservatory.

Ben Bennett is Philadelphia-based improvising percussionist. In searching for an expanded sonic palette, and more fluid movement between various techniques, he distilled the drum set into a smaller collection of drum heads, stretched membranes, and other objects which offered a wide variety of unconventional sounds from very few materials. He has toured actively for the past decade, playing in various groups and solo including with Michael Foster, Jack Wright, Evan Lipson, Tashi Dorji, Travis Laplante, Fred Lonberg-Holm, Leila Bordreuil, Brandon Lopez, Jacob Wick, and Zach Darrup.

Michael Foster is a saxophonist and multi-instrumentalist working in the fields of free improvisation, noise, free jazz, graphic & video notation, performance art, and other forms of weird music. Foster utilizes extensive preparations of his saxophone, augmenting it with amplification, objects, balloons, drum heads, vibrators, tapes, and samples as a method of subverting and queering the instrument’s history and traditional roles. His current ensembles include duos with cellist Leila Bordreuil, poet/vocalist Lydia Lunch, Richard Kamerman (as The New York Review of Cocksucking), percussionists Ben Bennett and Ted Byrnes, The Ghost (with Zach Rowden & Derek Baron), Barker Trio (with Tim Dahl & Andrew Barker), While We Still Have Bodies (with Sean Ali, Ben Gerstein, & Flin van Hemmen), and various collaborations with Weasel Walter, Marina Rosenfeld, and many others.

Nate Wooley was born in 1974 in Clatskanie, Oregon, a town of 2,000 people in the timber country of the Pacific Northwestern corner of the U.S. He began playing trumpet professionally with his father, a big band saxophonist, at the age of 13. His time in Oregon, a place of relative quiet and slow time reference, instilled in Nate a musical aesthetic that has informed all of his music making for the past 20 years, but in no situation more than his solo trumpet performance. He has since become one of the most in-demand trumpet players in the burgeoning Brooklyn jazz, improv, noise, and new music scenes. He has performed regularly with such icons as John Zorn, Anthony Braxton, Eliane Radigue, Ken Vandermark, Fred Frith, Evan Parker, and Yoshi Wada, as well as being a collaborator with some of the brightest lights of his generation like Chris Corsano, C. Spencer Yeh, Peter Evans, and Mary Halvorson.

Brandon Lopez is a 2018 Roulette Van Lier Fellow. The Lamentations + Bennett/Foster/Wooley/Lopez is made possible by the Edward and Sally Van Lier Fund of the New York Community Trust.