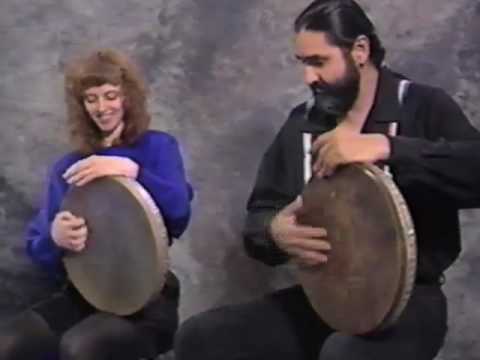 Four time Grammy Award winner, Glen Velez is the founding Father of the modern frame drum movement and is regarded as a legendary figure among musicians and audiences world-wide. Velez brought a new genre of drumming to the contemporary music scene by creating his own performance style inspired by years of percussion and frame drumming studies from various cultures. Velez’s virtuosic combinations of hand movements, finger techniques, along with his original compositional style, which incorporates stepping, drum language and Central Asian Overtone singing (split-tone singing), has undoubtedly opened new possibilities for musicians around the globe, resulting in a shift in modern percussion.

Layne Redmond has followed an extremely unusual path specializing in the small hand-held frame drum played primarily by women in the ancient Mediterranean world. From 1981 through 1990 she performed and recorded the first contemporary frame drum compositions with Glen Velez for European and American labels. During this period she intensively researched the ancient playing styles and history of the frame drum in religious and cultural rituals culminating in her book, When The Drummers Were Women.