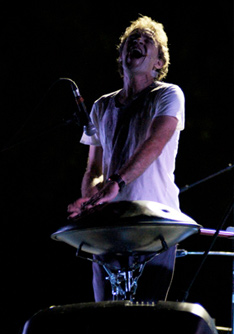 VITAL VOX: A VOCAL FESTIVAL explores the myriad power of the human voice in its solo and ensemble forms across a multitude of genres. It celebrates composer-performers in the vocal arts who stretch and expand the voice in new and original ways, continuing a strong contemporary tradition developed in the United States.

Sasha Bogdanowitsch with Loom Ensemble ‘Timbre Tree’
A new song cycle for solo voice, vocal trio & instruments that explores the ‘reflecting glass’ of live looping & processing. The work delves into the intersection between sung text and vocables  and is accompanied by an assortment of original instruments, such as wind instruments like the fujara & koncovka and the tenori-on, a unique visual electronic instrument. The work will also feature unique dance and vocals from interdisciplinary theatre group, Loom Ensemble: Andrew Broaddus, Helen Joyce, Raphael Sacks, Kate Hamilton and Michael Bauer on Cyr Wheel.

Lisa Karrer is a composer, vocalist, video and performance artist, and collaborates with numerous artists and ensembles, including projects in Estonia, Western Europe, Israel and Indonesia. She has produced CDs for the ensembles Music For Homemade Instruments and Gamelan Son of Lion, and with co-composer David Simons recorded and released their chamber opera The Birth of George on Harvestworks’ TELLUS label. Lisa’s compositions for Gamelan orchestra appear on Gamelan Son of Lion CDs Bending the Gending and Sonogram, released on Innova Records. Other large-scale multi-media works include Puhamu, a music theatre project premiered in Estonia, her wayang opera Woman’s Song: The Story of Roro Mendut, co-produced by the Kitchen and the World Music Institute, and Schismism pt 1: Fractured America produced by The Flea Theater in 2007. Schismism: Natural Law, based on the life of Charles Darwin premiered at NYC’s Living Theatre in October 2008; since then it has been produced in NYC and at venues across the U.S. Lisa’s video and sound installations have been exhibited at galleries such as Garnerville Arts Center, Rockland Center for the Arts, and A.I.R. Gallery in Brooklyn. Her multi-media works include collaborations with visual artists such as Gregory Barsamian, Jenny Lynn McNutt, Mary Ziegler, Peeter Laurits, Jackie Shatz, Pat Hickman and Bill Hochhausen. Recent appearances: the Microtonal Festival with Skip LaPlante and The Stone with The Hunter Gatherers. Lisa’s new chamber work “The Language of Life”, commissioned by NYC’s Flexible Orchestra premieres October 25 at the Ukranian National Home in downtown Manhattan.

David Simons is a composer and performer specializing in percussion, Theremin, electronics, homemade instruments, and World Music. Recordings of his works include two CDs on Tzadik records, Fung Sha Noon (2009) and Prismatic Hearing (2005); three CDs for Gamelan Son of Lion including compositions Kebyar Leyak, Cool it Wayang and Naked We Stand; his string quartet Cipher on the new NYFA Collection released on Innova Records; the opera The Birth of George (Tellus/Harvestworks) with Lisa Karrer; and on albums by God is My Co-Pilot, Stockhausen, Shelley Hirsch, Denman Maroney, Music for Homemade Instruments, and many others. David’s work in music for theater and dance has brought him to Europe, Asia, Guantanamo, Honolulu, and Bali. He has been awarded a Rockefeller Bellagio residency, NYFA fellowships, commissions from American Composers Forum, Mary Flagler Cary, Meet the Composer; travel grants from Artslink and Arts International. Simons’ composition Odentity for the Harry Partch instruments was premiered by Newband in 2007, and is featured on his newest Tzadik CD, FUNG SHA NOON. David is currently writing an opera influenced by the work of Marshall McLuhan. His writings on music and sound are published in Radiotexte (Semiotexte#16), EAR magazine, and Soundings.

“Lisa Karrer is a living example of how eastern and western tradition and experimental spirit in music creates innovative qualities.”
-Evi Arujaru, Postimees

Sasha Bogdanowitsch is a composer, vocalist & multi-instrumentalist whose work ranges from music for theater, dance and film to interdisciplinary performance and original songs. For the voice, Sasha often uses a language of sounds and has developed a way of singing that incorporates his studies in world, early & contemporary new musics. He has worked with many artists and companies such as: Loom, SoCorpo, Meredith Monk, Lou Harrison, Erdem Helvacioglu & the American Festival of Microtonal Music and has performed throughout the world and at various NYC venues like: Carnegie Hall, Whitney Museum, Symphony Space, BAM, La MaMa and the Stone. He is co-artistic director of Vital Vox, www.vitalvoxfest.com,  and a co-founder of arts non-profit, World In One, www.worldinone.org,  and the Loom Ensemble, www.loomensemble.com . Sasha is currently active composing & performing solo and with interdisciplinary theater ensemble, Loom, and vocal duo, SoCorpo. www.sashabmusic.com

Pamela Z is a San Francisco-based composer/performer and media artist who works primarily with voice, live electronic processing, sampling technology, and video. A pioneer of live digital looping techniques, she creates solo works combining experimental extended vocal techniques, operatic bel canto, found objects, text, digital processing, and MIDI controllers that allow her to manipulate sound with physical gestures. In addition to her solo work, she has composed and recorded scores for dance, theatre, film, and new music chamber ensembles. Her large-scale multi-media works have been presented at venues including Theater Artaud and ODC in SanFrancisco, and The Kitchen in New York, and her media works have been presented in exhibitions at the Whitney Museum (NY) , the Diözesanmuseum (Cologne), and the Krannert Art Museum (IL). Her multi-media opera Wunderkabinet – inspired by the Museum of Jurassic Technology (co-composed with Matthew Brubeck) has been presented at The LAB Gallery (San Francisco), REDCAT (Disney Hall, Los Angeles), and Open Ears Festival, Toronto. Pamela Z has toured extensively throughout the US, Europe, and Japan. She has performed in numerous festivals including Bang on a Can at Lincoln Center (New York), Interlink (Japan), Other Minds (San Francisco), La Biennale di Venezia (Italy), and Pina Bausch Tanztheater Festival (Wuppertal, Germany). She is the recipient of numerous awards including a Guggenheim Fellowship, the Creative Capital Fund, the CalArts Alpert Award in the Arts, The MAP Fund, the ASCAP Music Award, an Ars Electronica honorable mention, and the NEA and Japan/US Friendship Commission Fellowship. She holds a music degree from the University of Colorado at Boulder. For more information visit www.pamelaz.com

“…Pamela Z is, as the saying goes, an intriguing bunch of people, a vocalist who mixes street instincts with vestiges of operatic singing and other between-style sounds, and she also is a gifted improviser and manipulator of delay loops to build up layers of sound.”
-Josef Woodard, Los Angeles Times