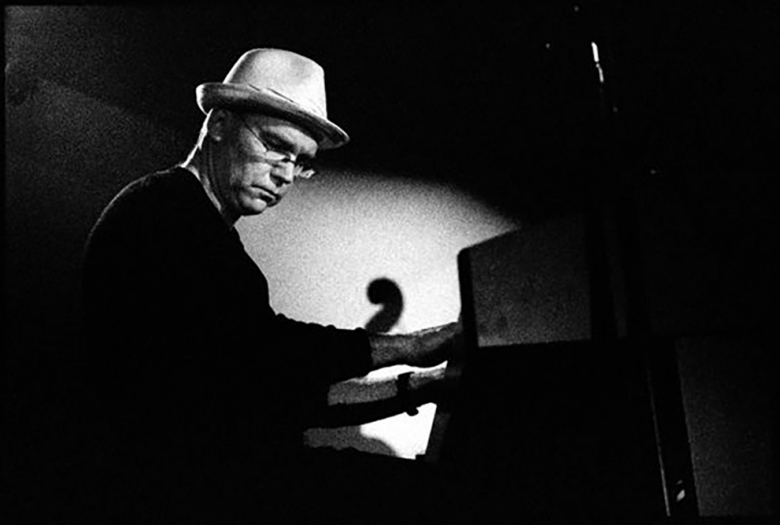 Bringing together four uniquely defined voices of new-music, jazz, and improvised composition, Gravitas Quartet explores the depths of texture, sonority, rhythm, and esnsemble fluidity available to masters with a broad palette. All individually haled as forerunners of modern music – each journeying from their vast musical backgrounds to redefine the sonic landscape. Gravitas Quartet has recorded and released its first CD, Way Out East Songlines (June 2006)

Wayne Horvitz is a composer, pianist and electronic musician who has performed extensively throughout Europe, Asia, Australia, and North America. He is the leader of Zony Mash, Pigpen, The Four plus One Ensemble and co-founder of the New York Composers Orchestra. He has performed and collaborated with Bill Frisell, Butch Morris, John Zorn, Robin Holcomb, Fred Frith, Julian Priester, Philip Wilson, Michael Shrieve and Carla Bley among others. He has been commissioned by the NEA, Meet The Composer, Kronos String Quartet, Seattle Chamber Players, Mary Flagler, BAM, Earshot Jazz, and others. Collaborations with choreographers include work with Paul Taylor with the White Oak Dance Project, Liz Lerman Dance Exchange, and Crispin Spaeth. Film work includes music and sound design for 3 PBS specials and Gus Van Sandt’s Psycho. He is the year 2001 recipient of the Artist Trust Fellowship (Seattle) and the 2002 recipient of the Rockefeller Foundation MAP Grant.

Since moving to Vancouver in 1989, Toronto born cellist Peggy Lee has become a major voice in the creative music community. Current projects include her own sextet, the Peggy Lee Band, Ron Samworth’s Talking Pictures, the Tony Wilson Sextet, New Orchestra Workshop, Dave Douglas’s Mountain Passagess and the new music ensemble Standing Wave. Peggy’s work has been documented on 3 cds with the Peggy Lee Band (Spool Records) and on many other recordings including a duo with Carlos Zingaro (Hatology), a trio with Michael Moore and Dylan van der Schyff (Spool), another trio with vand der Schyff and pianisst John Wolf Brennan (Leo), and a quartet with Dave Douglas, Louis Sclavis, and Dylan van der Schyff (Premonition).

Sarah Schoenbeck , bassoonist, is dedicate to expanding the sound and role of the bassoon in the worlds of contemporary notated and improvised music. The Wire magazine places her in the “tiny club of bassoon pioneers” at work in contemporary music today. Sara has performed with Yusef Lateef, Anthony Braxton, Leo Smith, Miya Masaoka, Gino Robair, Fred Frith, John Butcher, Mark Dresser, Pauline Oliveros, and Nels Cline among many others. She is currently a member of Vinny Golia’s Large Orchestra. Sara has performed in jazz orchestras backing Stevie Wonder, Diane Reeves and under the baton of Quincy Jones. She has recorded for television and Major motion pictures, including the Matrix Trilogy, Dahmer and Spanglish, and has performed throughout North America and Europe at a variety of major festivals.

Denver trumpeter Ron Miles’ resume includes time with Bill Frisell, Don Bryon, the Ellington Orchestra, and Fred Hess’ Boulder Creative Music Ensemble. Besides being solicited all over the world for his unique sound, Ron is a staple of the Denver jazz scene and his recent releases as band leader show off his skills as a composer and arranger as well as a “phenomenally gifted trumpeter” (Bill Milkowski). Ron Miles was widely recognized as a musical director and arranger with the release of Ginger Baker’s Coward of the County (Atlantic 1999). His compositions anchor that record and highlight the varied influences from which Ron draws inspiration. Hailed as an inventive composer and gifted trumpeter on his solo releases, Ron cruised through the 1990s with a series of well received releases on Gramamvision (My Cruel Heart, Woman’s Day) and Capri (Witness, Ron Miles Trio).