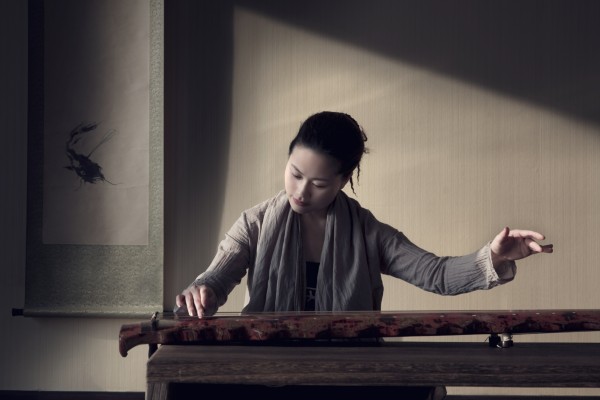 Traditional and Experimental works for the qin (7-string zither).

PART II
“What is Singing”, a group improvisation based on the music piece ‘Shen Ren Chang’, one of the
oldest, anonymous, tunes in the literature for the Chinese Zither—Qin.

Ms. Wu, is an award-winning guqin player who began her training at the China Conservatory in 1991 at the age of twelve. (The guqin is a seven-stringed zither with a 3,000 year history in China.) In 1997, when she was eighteen, she was invited to perform with the Taipei Folk Orchestra, the youngest guqin player from China ever to perform in Taiwan. The same year she entered the Central Conservatory of Music in Beijing, where she majored in guqin while studying the cello
and double bass as well, and in 2004 she became the first musician in China to receive a Master’s degree in guqin performance. Ms. Wu’s dual education in both Chinese and Western music has inspired her to seek a new voice for the guqin in contemporary music, and she has performed and recorded with jazz, rock, and classical musicians. In 2005 she performed with China’s foremost rock star, Cui Jian, in his solo concert at the Capital Gymnasium in Beijing, and in 2006 she collaborated with the distinguished composer Liu Sola in the production of a contemporary opera,
The Fantasy of the Red Queen, at the House of World Cultures in Berlin. Ms. Wu has made several brief performance tours in Asia and Europe but this is her first opportunity to travel to the U.S.