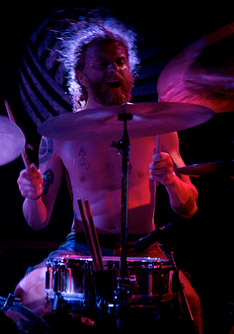 Since the inception of his new solo guitar project Hubble, Ben Greenberg of Zs and Pygmy Shrews has sought to exploit the guitar for its ulterior qualities, simultaneously displaying a true love for the instrument while redefining how guitar music is understood. Whether distortion-drenched or clean, Ben describes painstaking result as “cyber-dread”, an apocalyptic, beat-less quasi-electronic music, conjuring Terry Riley’s pulsing minimalist structures and Gregg Ginn’s aggressive, avant-garde rock.

Greg Fox (Guardian Alien, Liturgy), called “one of the most exciting drummers I’ve seen recently in any kind of music” by Ben Ratliff of the New York Times, comes to Roulette with a solo percussion set.