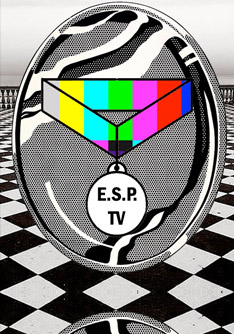 E.S.P. TV is taped in front of an audience with live green-screening and analog video mixing. The entire night is recorded to VHS and edited into half hour episodes for airing on cable TV in New York City. After airing, the episodes are posted online at http://vimeo.com/channels/esptv for later viewing.

Past artists on E.S.P. TV include: Mazing Vids, Innergaze, Shana Moulton, Further Reductions, Regal Degal, Martha Colburn, Maria Chavez, Forma, YOU., Rachel Mason, Erica Magrey, Kate Gilmore, and many more. Shows have been taped in various locales including The Schoolhouse in Brooklyn, Millennium Film Workshop in NYC as a part of INDEX Festival, with Mutual Dreaming at 285 Kent and most recently at General Public in Berlin.