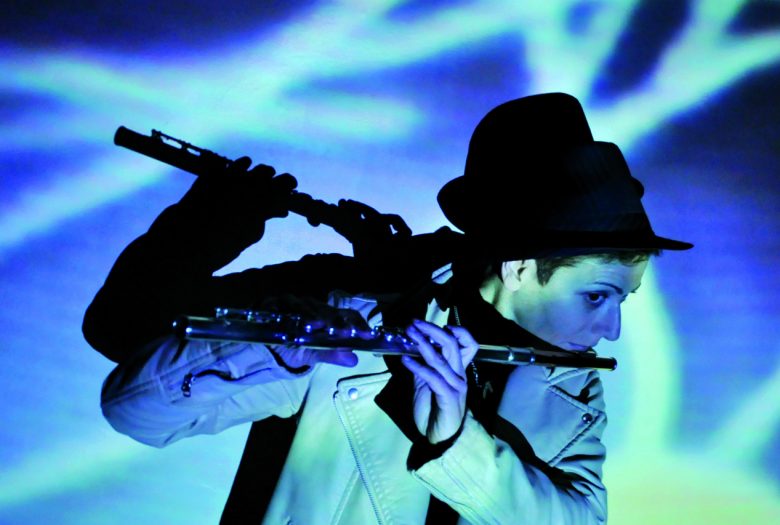 In celebration of the release of her solo CD, La Belle Ombre (The Beautiful Shadow), Yael Acher, flutist and composer, has invited three unique artists to compose together an associative world evoking the urban spirit. The show will consist of diverse multimedia expressions and impressions, based on contemporary improvisation and created out of the interaction among the performers.

Since Halloween is at the door, the audience is invited to show up in costumes”¦and there will be surprises”¦

Yael Acher’s work has been called “spell binding, action packed and deeply original” (Berlingske Tidende, Denmark.) A native of Tel Aviv, Acher graduated with a BA degree in music and classical flute performance from the Rubin Academy for Music and Dance in Jerusalem. She lived and worked in Copenhagen from 1992-2005. Since 2005 she has worked, studied composition, and resided in New York.

Her music has been reviewed internationally in Jazz Magazine (France) and Cadence Magazine, among others, and has been broadcast in Denmark, Spain, France, Rumania and the USA. She is the recipient of many grants, including awards from the Fulbright Commission, Copenhagen Culture Foundation, Danish Art Council, Danish Artists Union, Danish Jazz Foundation, Danish Musicians Union. Her compositions have been released on three CDs thus far, Redcar (MODIANO), “MODIANO” (MODIANO) and La Belle Ombre (Capstone.)

Benjamin Chadabe, improvising percussionist and video artist, has performed and recorded with poets, sculptors, dancers, and other media artists, including Min Tanaka, Ellen Sinopoli Dance Company, Pierre Joris, Nicole Peyrafitte, and Warren Burt. He also has collaborated with sculptor Andrew Jerabek in concerts involving site-specific sound-sculptures at Bennington College, the RCA Gallery in Albany, and at SUNYA. Chadabe graduated from Bennington College in 1994 where he studied percussion with Milford Graves and video arts with Tony Carruthers. He currently is Executive Director of Electronic Music Foundation.

Andrés Martí­nez has been involved with sound art, contemporary music composition and performance, and music composition for film, video documentaries, and TV. He is an ex-member of the noise/punk band, Yuri Gagarin. He has collaborated with filmmakers such as Mauricio Pardo, Colbert Garcí­a, Juliana Barrera, Laura Richard, and Andrew Maclean. With Colombian composer Camilo Sanabria he founded the music collective Monareta, an experimental medley of Caribbean music, dub, and negroclash sounds. Their music can be heard on Nacional Records. He is pursuing his Master’s Degree in Music Composition at New York University and is developing his music research through a Fulbright Grant.

Kurt Ralske is a video artist, composer, and programmer who uses technology to research time and the atemporal. He works in a variety of practices, including improvised audio visual performance, in installations, in digital print media, and in software art. His work is created exclusively with his own custom software, written in C/C++ and Java. He has performed and exhibited at museums, galleries, and theaters throughout Europe, Canada, and the US, including the Guggenheim Bilbao, Los Angeles Museum of Contemporary Art and the Montreal Museum of Contemporary Art. Kurt programmed and co-designed a 9-channel video installation that is permanently in the lobby of the MoMA in NYC. In 2003, his work received First Prize at the Transmediale International Media Art Festival in Berlin, as a member of the video ensemble 242.pilots. He also is the author/programmer of Auvi, a popular video software environment in use by artists in 22 countries. The New York Times has praised his “compelling, ingenious alliance of sound and motion” and “technological wizardry.” Kurt resides in New York City. He teaches at the School of the Museum of Fine Arts, Boston and the School of Visual Arts, New York.