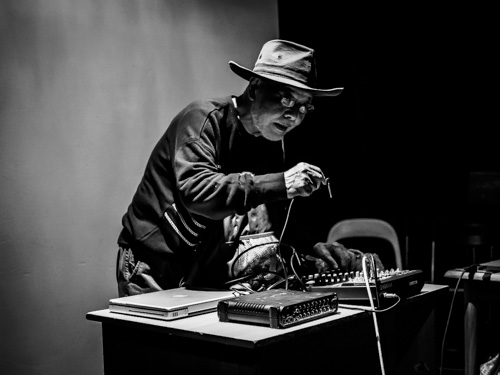 Paramedia Mix: Tone studied methods of “translating” images to sounds, but for the most part the images in those compositions has, first, been translated into some form of machine – behavior (Robert Ashley). Paramedia Mix is a concept as well as a machine that rearranges pattern of sounds from the mixed originals into unthinkable form.

Yasunao Tone (刀根 康尚 Tone Yasunao) (b. 1935) is a Japanese artist who has worked with many different types of media throughout his career. He was born in Tokyo, Japan, and he graduated from Chiba Japanese National University in 1957, majoring in Japanese literature. He became active in the Fluxus movement in the 1960s and moved to the United States in 1972. He organized and participated in many noise music performance groups such as Group Ongaku, Hi-Red Center and Team Random (the first computer art group organized in Japan). —Bio as of 2019