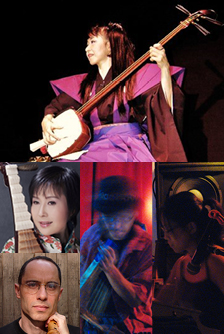 Yumiko Tanaka received an MA in aesthetics and art history from Tokyo University of the Arts. She studied Gidayu recitation and Gidayu-shamisen with Living National Treasure Komanosuke Takemoto, and the late Kinshi Nozawa in Bunraku Puppet Theater. Since her debut performance in Tokyo, Tanaka has been very active worldwide as a Shamisen player and vocalist. She worked with Yuji Takahashi, Keiji Haino, Yoshihide Otomo, Kazuhisa Uchihashi,  Seiichi Yamamoto, Elliott Sharp, Carl Stone, Ned Rothenberg, John Zorn, Samm Bennet, David Moss, Tatsuya Yoshida, Akira Sakata, Naruyoshi Kukuchi, Basil Twist, Heiner Goebbels, and so on. She received the Education Minister’s Art Encouragement Prize for Newcomers in 1990, and a fellowship from the Asian Cultural Council in 2006-2007, became a grantee of Japanese Government Overseas Study Program for Artists in 2008. In 2012, she participated in the world tour of “Overcoming the Disaster, Gratitude from Japan to the World concert by Tohoku Folk Performance groups & Ondekoza Taiko group & musicians” under the auspices of the Japan Foundation, and performed at Jazz at Lincoln Center and UN Headquarters in New York, at Ahmanson Theatre in Los Angeles, and at Palais des Congrès in Paris, and so on.  You can listen to her music instrumental improvisation listen to her music on CD ‘tayutauta’ released from Improvised Music from Japan in 2004.
japanimprov.com/ytanaka/index.html

Composer/Performer Ned Rothenberg has been internationally acclaimed for both his solo and ensemble music, presented for the past 30 years in North and South America, Europe and Asia. He performs primarily on the alto saxophone, clarinet , bass clarinet, and the shakuhachi – an endblown Japanese bamboo flute. He leads the trio Sync, with Jerome Harris, guitars and Samir Chatterjee, tabla. Recent recordings include Quintet for Clarinet and Strings, Ryu Nashi (new music for shakuhachi), Inner Diaspora, The Lumina Recordings and Ghost Stories, all on John Zorn’s acclaimed Tzadik label, as well as Live at Roulette with Evan Parker, Are You Be and The Fell Clutch, on Rothenberg’s own Animul label.
nedrothenberg.com

Pipa player, singer and composer Min Xiao-Fen was born in the ancient capital of Nanjing, China. She has become internationally known for her virtuosity and fluid playing style on the pipa, whether performing classical music or in an avant-garde or improvised settings. Min has recorded traditional Chinese music together with many of the world’s leading symphony orchestras and other ensembles and has performed at a number of international festivals. Since moving to the United States in 1992, she has been featured as a soloist with the Brooklyn Philharmonic, the Pacific Symphony, the San Diego Symphony, the New Haven Symphony Orchestra, the Stanford Symphony Orchestra, the Baltimore Chamber Orchestra, the San Diego Chamber Orchestra, the San Francisco Contemporary Music Players, the Third Angle Ensemble, the Amiens Chamber Orchestra in France and the Nieuw Ensemble in Holland, among many others.
bluepipa.org

Vortex is percussionist Satoshi Takeishi and pianist Shoko Nagai. Originally from Japan, and now based in New York City, these purveyors of free improvisation, consisting primarily of piano, percussions, and various electronics, scored the soundtrack to a feature-length film, Starfish Hotel (2006), directed by John Williams.
home.earthlink.net/~takeishi/index.html