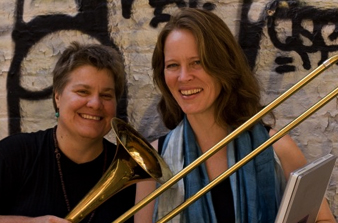 Kristin Norderval is a classically trained singer, improviser, and composer who performs an eclectic repertoire that spans the renaissance to the avant-garde. Many works have been written for her, and her collaborations have included work with choreographers, sculptors, filmmakers and installation artists. Since 1997, she has also been recording on-site improvisations in unusual spaces, many of them industrial. Profiled by The New York Times in “Downtown Divas Expand their Horizons” and hailed as one of “new music’s best” by the Village Voice, her performances range from concert and opera to multi-media events. Her work as a soloist has taken her to festivals throughout the world, and her credits include performances with the San Francisco Symphony, the Stuttgart Philharmonic, Oslo Sinfonietta, the Philip Glass Ensemble, and numerous new music ensembles in the United States and Europe. She has recorded new works for Mode, Nonesuch, Point, and CRI as well as for Norwegian, German, and Austrian radio, and has performed in opera and music-theater productions for Lincoln Center, BAM, the Yerba Buena Arts Center in San Francisco, Santa Fe Opera, Netherlands Dance Theater, and Dance Alloy. Ms. Norderval received 2002 Artist Residencies at Harvestworks Digital Media Arts and Rensselaer Polytechic Institute. Ms. Norderval is certified to teach the meditative improvisation practices of Deep Listening.

More information about Kristin on her web site at www.norderval.org

Monique Buzzarté, trombonist is an avid proponent of contemporary music, commissioning and premiering many new works for trombone alone, with electronics, and in chamber ensembles. Since 1983 her New Music from Women: Trombone Commissions project has been supporting the expansion of the trombone repertoire with over twenty-five commissions in various genres. Ms. Buzzarté’s recordings include John Cage’s Five3 with the Arditti Quartet (Mode John CAGE: Vol. 19 – The Number Pieces 2) and Dreaming Wide Awake with the New Circle Five (Deep Listening 20). An author, activist, and educator as well as a performer/composer, Ms. Buzzarté has published research on the brass music of women composers and led efforts which led to the admission of women into the Vienna Philharmonic Orchestra. Ms. Buzzarté is certified to teach the meditative improvisation practices of Deep Listening.

More information about Monique on her web site at www.buzzarte.org