It is with great hope and excitement that Roulette announces its Resident and Commissioned artists for the 2020–2021 season. Staying true to our core mission—that Roulette remains an essential and centralized place for artists to realize their creative visions, even in times of great uncertainty—we began to work with artists in early March to build a safe, exciting, and unique body of new work. Pianist, singer, composer, and improviser Sonya Belaya, trumpeter Jonathan Finlayson, composer and drummer Tomas Fujiwara, artist and interdisciplinary designer Crystal Penalosa, and jazz performer and vibraphonist Joel Ross have been selected for year-long residencies. Commissioned artists include song-writer and vocalist Leila Adu; vocalist Ganavya Doraiswamy; alto saxophonist and composer Darius Jones; multidisciplinary performer and sound artist Luisa Muhr; sound artist and composer Teerapat Parnmongkol; interdisciplinary artist, composer, and pianist Mary Prescott; and composer and saxophonist Immanuel Wilkins.

Each artist will present at Roulette in 2020–2021. The performances will be broadcast live from our theater, with the possibility of a limited in-person audience depending on what safety and public health guidelines allow. 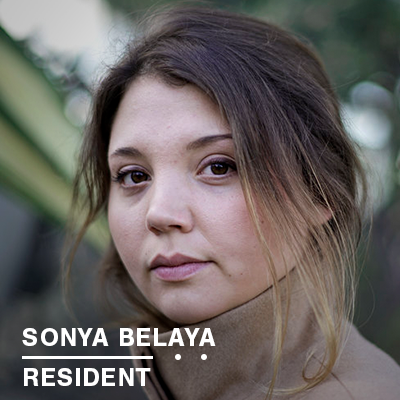 Sonya Belaya is a first generation Russian-American pianist, singer, composer, and improviser, who divides her time between Michigan and New York. Committed to multiplicity, she is invested in vulnerable art and the development of strong, personal collaborations. Her work centers around the integration of women’s trauma as musical narrative, with a focus on storytelling as a vehicle for social change. Sonya’s lead project is Dacha, a septet flowing freely through influences of creative music, jazz, folk, and contemporary music. The ensemble seeks to preserve and re-contextualize the ancestral memories of Russian folk traditions. Dacha was born out of a necessity to find a sense of home and belonging when Belaya’s mother went missing in 2014. Belaya’s debut album, Songs My Mother Taught Me, was released in 2019. Photo: Katherine Pekala. 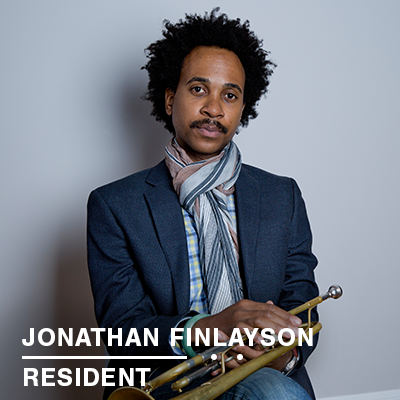 Jonathan Finlayson has been recognized by The New York Times as “…an incisive and often surprising trumpeter,” who is “…fascinated with composition.” Born in 1982 in Berkeley, California, Finlayson began playing the trumpet at the age of ten in the Oakland public school system. He came under the tutelage of Bay Area legend Robert Porter, a veteran trumpeter from the bebop era who took Finlayson under his wing; he was often seen accompanying Porter on his gigs about town and sitting in on the popular Sunday nights jam session at the Bird Cage. He subsequently attended the New School for Jazz and Contemporary Music where he studied with Eddie Henderson, Jimmy Owens, and Cecil Bridgewater. Finlayson is a disciple of the saxophonist/composer/conceptualist Steve Coleman, having joined his band Five Elements in 2000 at the age of 18. He is widely admired for his ability to tackle cutting-edge musical concepts with aplomb. Finlayson has performed and recorded in groups led by Steve Lehman, Mary Halvorson, Craig Taborn, Henry Threadgill, and played alongside notables such as Von Freeman, Jason Moran, Dafnis Prieto, and Vijay Iyer. 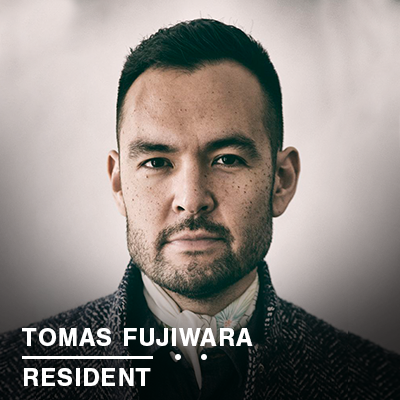 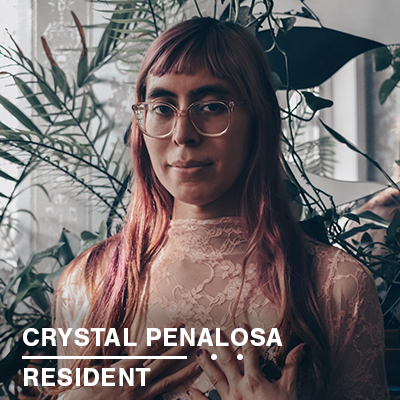 Crystal Penalosa (she/they) is an artist & interdisciplinary designer based in New York. Their work focuses on self-compassion practices while engaging with authenticity and personal safety. She has performed collaboratively and presented solo works in New York at Issue Project Room, Roulette, MoMA PS1, SPEKTRUM in Berlin, and at the Golden Pudel in Hamburg. She currently works with the veteran underground record label Generations Unlimited, Voluminous Arts record label, and with the New Jersey Governor’s Office of Innovation. Photo: Plenilunix Photography. 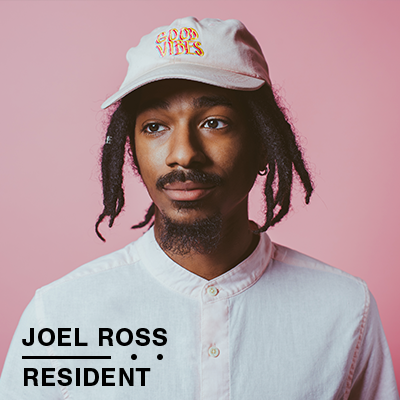 Chicago native and newly minted Blue Note artist Joel Ross is a sophisticated jazz performer with a sound steeped in the post-bop tradition. Joel has performed with many of jazz’s most lauded artists including Ambrose Akinmusire, Christian McBride, Marquis Hill, Gerald Clayton, Louis Hayes, Melissa Aldana, Wynton Marsalis and Herbie Hancock, among others. He leads his own group Joel Ross’s Good Vibes, among other projects, and recently released his debut album KingMaker on Blue Note in 2019. He is currently based in New York City. 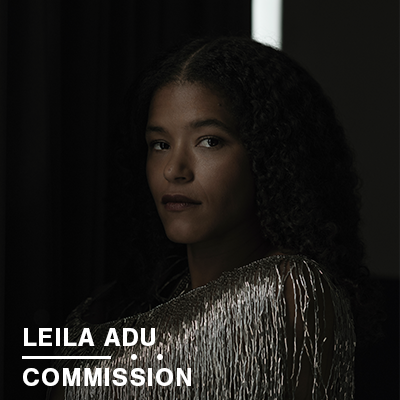 Leila Adu is an astonishing force in the space where electropop, avant-classical and singer-songwriter meet. Exploring her roots in New Zealand, Britain and Ghana, Adu is an international artist who has performed at festivals and venues across the world. Compared to Nina Simone and Joanna Newsome by WNYC, Adu has released five acclaimed albums, and has given visionary solo BBC and WQXR performances. Adu’s credits include Ojai Music Festival, Bang on a Can, the New Jersey Symphony Orchestra, Late Night with David Letterman, and composing for a Billboard charted album. Adu holds a Princeton University music composition PhD. 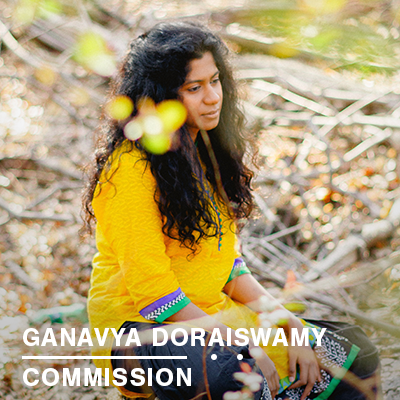 Tamil Nadu-raised and New York-born critically acclaimed vocalist Ganavya Doraiswamy (b. 1991) lives, learns, and loves fluidly from the nexus of many frameworks and understandings. Hers is a deeply profound and rooted voice.  A multidisciplinary creator, she is a soundsmith and wordsmith. Trained as an improviser, scholar, dancer, and multi-instrumentalist, she maintains an inner library of “spi/ritual” blueprints offered to her by an intergenerational constellation of collaborators, continuously anchoring her practice in pasts, presents, and futures. Both as an educator and student, she “wishes to study and bring liberative techniques into this world… study certain dyads: what empowers, who is disempowered; what heals, who is ailing— and wishes to wed the two.” 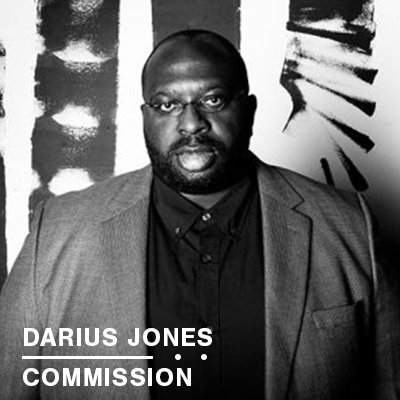 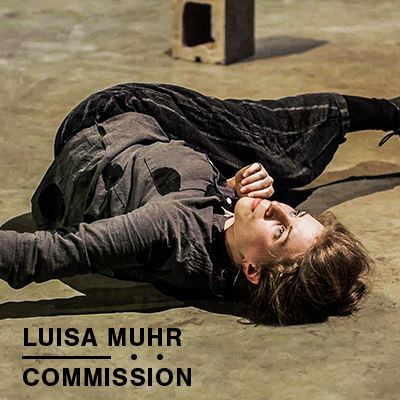 Luisa Muhr is a multi and interdisciplinary performer, improvisor, installation artist, sound artist, composer, director, and theater maker, originally from Vienna, Austria. A previous inhabitant of Montreal, she has been permanently living and working in New York since 2013. Her artistic home is in the experimental/avant-garde. As a performer she specializes in performance, vocal, and movement art. Muhr is the creator and curator of New York’s leading interdisciplinary womxn and non-binary artists performance series Women Between Arts at The New School and was an Artist in Residence at Pioneer Works in 2019. She is currently writing and developing a political experimental opera with six-times-Grammy-winning composer Arturo O’Farrill. www.luisamuhr.com. Photo credit: Video still. Pioneer Works. False Harmonics. 2018. 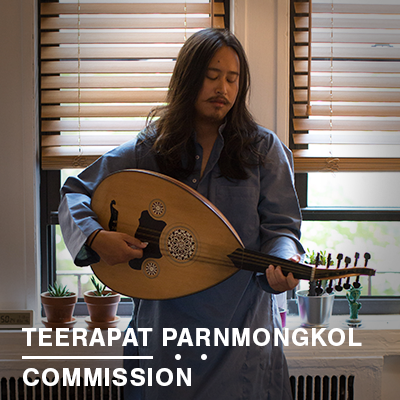 Teerapat Parnmongkol was born in Sakon Nakorn, Thailand before moving to Udontani at the age five or six. Parnmongkol began living and studying music in Bangkok in 2006 and continued his studies at Brooklyn College in the USA with a focus in performance and interactive media arts from 2013–2015. Parnmongkol’s main interests are in sound, music, vibration and performance in mystical traditions. 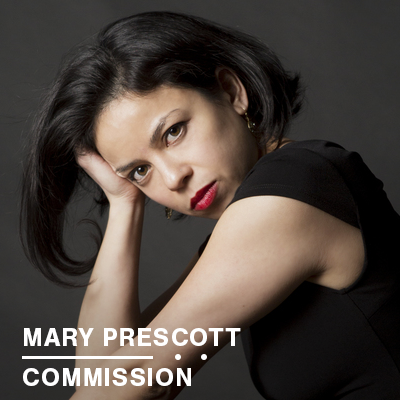 Mary Prescott is a Thai-American interdisciplinary artist, composer and pianist based in Minneapolis and New York City who explores the foundations and facets of identity and social conditions through experiential performance. She aims to foster understanding and create pathways for change by voicing emotional and human truths through artistic investigation and dissemination. Prescott’s output includes several large-scale interdisciplinary works, improvised music, an immersive multimedia chamber opera, a 365-day sound journal, solo and chamber concert music. Prescott is a Resident Artist at Roulette Intermedium (NYC), a Lanesboro Arts Artist-in-Residence (MN), and a 2019-21 The American Opera Project Composers and the Voice Fellow. She has previously held residencies at Hudson Hall, Areté Venue and Gallery, Avaloch Farm Music Institute, and Arts Letters and Numbers. She is an awardee of a National Performance Network Creation Fund, and the Documentation and Storytelling Grant supported by the Doris Duke Charitable Foundation, the Andrew W. Mellon Foundation, and the National Endowment for the Arts; a New Music USA Project Grant; an American Composers Forum Create Commission supported by the Jerome Foundation; and several state and regional awards. She has been commissioned by Roulette Intermedium (NYC), Living Arts (Tulsa), Public Functionary (Minneapolis), Shepherdess Duo, Piano Teachers Congress of NY, and Duo Harmonia. 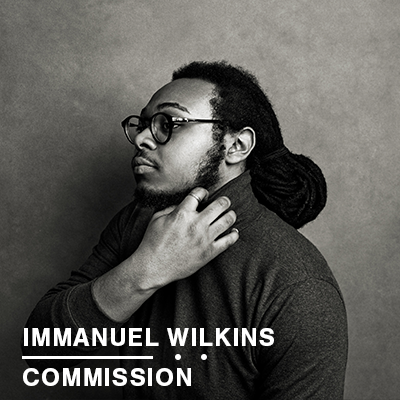 Immanuel Wilkins is a saxophonist, composer, arranger, and bandleader from the greater Philadelphia-area. While growing up, he honed his skills in the church and studied in programs dedicated to teaching jazz music like the Clef Club of Jazz and Performing Arts. Moving to New York in 2015, Wilkins proceeded to earn his bachelor’s degree in Music at Juilliard while simultaneously establishing himself as an in-demand sideman, touring in Japan, Europe, South America, The United Arab Emirates, and the United States and working and/or recording with artists like Jason Moran, the Count Basie Orchestra, Aaron Parks, Gerald Clayton, Gretchen Parlato, Lalah Hathaway, Solange Knowles, Bob Dylan, and Wynton Marsalis. His own work as a bandleader has evolved tremendously in recent years allowing him to grow as a composer and arranger and has led to him to receive a number of commissions awards from including from Roulette, The National Jazz Museum in Harlem, The Jazz Gallery Artist Residency Commission Program, and The Kimmel Center Artist in Residence for 2020. Wilkins’s mission is to create a sound that has a profound spiritual and emotional impact which will allow him to become a great leader in the long lineage of jazz musicians. Through studying the human pathos of the music and the culture of jazz, Wilkins aspires to bring people together through the commonality of love and belief in this music.