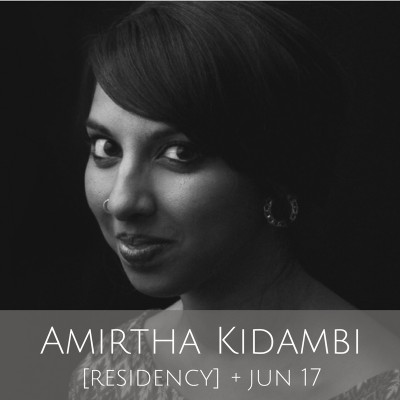 My parents are from South India (Tamil Nadu) and immigrated to the U.S., settling in Buffalo where I was born. I was raised in the Bay Area where we did weekly devotional bhajan singing in the Indian community — where I basically learned to sing, that and choir in public school from age five. I also grew up doing Indian classical Bharatanatyam dance, which is deeply connected to the rhythms of Carnatic music and accompanied by a Carnatic ensemble — typically voice, violin, mridangam and the dance teacher intoning the rhythms on syllables. I grew up listening to a lot of that music, but also lots of classical music, jazz, R&B, metal, and punk. I got into more experimental / avant-garde music in college while studying classical music and hosting a radio show called “The Modern Age,” where I learned about a lot of music and composers such Edgard Varèse and early electronic music, Cecil Taylor, Albert Ayler, Anthony Braxton, Meredith Monk, and Giacinto Scelsi. That got me interested in singing experimental music and performing the work of contemporary composers, so when I moved to New York that is what I primarily focused on, and then turned towards improvising and composing my own music.

I guess I have always been interested in intensity and extremity, individuality and expression, subversion, music, and sounds that went against some kind of establishment… so all the music I was into when I was young across categories had those elements. Mostly I am focused on Elder Ones, which is the primary vehicle for my compositions but getting more used to the idea of solo work, which I found really daunting in the past. As I get more comfortable with it I am digging in deeper and think it will be a focus for me in the coming years. In recent years, I decided to only work with people who are asking me to do “my thing” within their music and have long-term existing relationships with them that will carry into the future. The music of Mary Halvorson, Darius Jones, Charlie Looker, Robert Ashley, Pat Spadine and other folks, all of it makes room for my own creativity through improvisation and expression, always in dialogue with the composer.

I’ve been working primarily on new solo work and also new pieces for Elder Ones for the first concert. The solo work is really informed by my studies in India and listening to a lot of solo work by musicians I admire. I’m also incorporating some percussion using ankle bells, from my days as a Bharatanatyam dancer and using some of that rhythmic language, though it’s still in an experimental stage. For Elder Ones, I’ve been writing music in direct response to all the horrors of our time. It’s overtly “political” and I don’t really care if it’s heavy-handed. We’re “talking back” through the music about what’s going on. It’s the only thing I know to do at the moment. We also brought in some new sounds, synth and electronic Sensory Percussion, so that has been adding an interesting sonic element to weaponize.

For the second one, I’m developing a vocal quintet of Emilie Lesbros, Anais Maviel, Jean Carla Rodea and Charmaine Lee (I’ll also perform in it) and an improvised duo with Lea Bertucci on analog electronics. I’m still developing the ideas for the second concert, but the general goal is to write an ensemble vocal work that gives these very unique and creative singers room to do their thing and experiment, in the context of a vocal group. I feel that improvised music, especially in the avant-garde scene is very instrument-centric, so this is an effort to build community with singers. There are some really amazing vocalists in New York right now! I was really inspired by working in Darius Jones’ vocal project Elizabeth-Caroline Unit.

How did you become involved with Roulette?

Roulette was one of (if not the first) venue where I was paid as a professional musician in New York. It was back in 2009 or 2010 with Seaven Teares at the Greene Street location in Soho, opening for Lee Ranaldo. Since then, Roulette has been part of nearly every major project I’ve done in New York — Dialogue Social with Muhal Richard Abrams, Robert Ashley’s CRASH, Darius Jones’ Oversoul Manual, Pat Spadine’s SheSings Herself A LittleSong, as well as the Jerome Foundation Emerging Artist Commission where I developed Elder Ones, and now the residency. I owe SO MUCH to this venue, seriously!

What is it like living and working in New York City?

Hard! I live in Astoria, which I really love because it’s extremely diverse and has a major neighborhood vibe. The thing that makes it worth it is the people interactions, both in the music scene and just the general weirdness of people around you. The musical community is just so incredible here. I feel like I meet new musicians who are incredible all the time and then there are people like Reggie Workman walking around who you can run into in a hallway at the New School (after our last Elder Ones rehearsal). How crazy is that?

Two things… my summer in India last year had an enormous impact on what I am doing. I felt unbelievably connected to my roots, speaking my language and going to temples. I was there to study music and took vocal lessons daily with an amazing guru named Karaikal R. Jaishankar. I can really feel the traces of that in my voice, but also in how I’m thinking about music. We had some very philosophical conversations about music and the divine, what it is to express oneself and all kinds of things. I also saw a concert almost every day of the week, so what I was putting in my ears was unbelievable virtuosic Carnatic improvisation. It was just a mind-blowing summer that was life-changing in many ways. I can really feel its influence, particularly in my solo work.

How did your interest in your work begin?

I came to New York for grad school and got increasingly interested in new music and started working with a lot of composers. As I was doing that, I was also improvising and learning a lot about my own voice, not just as a singer but as an artist. I learned a lot about myself through collaboration with other amazing artists in New York and eventually wanted to break free from always interpreting the work of others and write my own. I had been writing “songs” on and off for years, but they never really felt totally right. At Brooklyn College we had this amazing little cadre of performer-composers called the Sweat Lodge, where we wrote and performed each other’s work. That was when I first started using harmonium outside of the Indian music context and started to write music that sounded more like “myself.” Free improvising with other musicians taught me so much and continued to expand my vocal vocabulary and through adapting to the individuality of others, I started to find myself in juxtaposition. The more I focused on improvising, the more apparent my inclinations and my vision as a composer started to gain some clarity and momentum. I started writing pieces for voice and harmonium and then through the Roulette commission in 2014, I started writing the music for Elder Ones and we did our record in 2016 and having been active since then.

Who would you ideally like to collaborate with and why?

Honestly, I am so happy and excited about the people I am collaborating with now that it’s hard to say. Mary Halvorson, Charlie Looker, Darius Jones, Lea Bertucci, the amazing improvising vocalists I’m going to work with for the second residency concert in June, Emilie Lesbros; Anaïs Maviel; Charmaine Lee; Jean Carla Rodea and of course my band Elder Ones with Max Jaffe and Matt Nelson, who have been in the original line-up and the powerful additional of Nick Dunston; the folks in the Ashley project; Dave Ruder, Gelsey Bell, Aliza Simons, Brian McCorkle and Paul Pinto…I couldn’t be more excited about the people I already get to work with. The collaborations have literally everything to do with who I am as a musician and what I’m doing. If I had to say someone new…I would say Jen Shyu. I think what she does as a vocalist is very in line with what I want to do in my own way. She is so inspiring!

How long have you lived in New York City and what brought you here?

Nine years, which is crazy! I came under the guise of going to school, which was great, but really just to do music and work with people in the scene here. Also pizza?