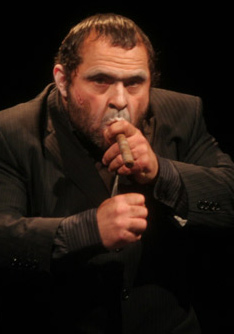 Hosted by Brooke Gladstone,  co-host and managing editor of “On the Media”  on WNYC

Visit www.villagillet.net/en/portal/walls-and-bridges/detail/article/un-portrait-de-lhomme-en-animal/ to find out more.

Are, we, humans, so special? Four artists will probe the  very nature of humanity, presenting and embodying  the wild instincts and behaviors that reside in us.  After  these performances-investigations, two distinguished  paleoanthropologists, Ian Tattersall and Pascal Picq, will join  the artists for a talk about the resemblances and differences  between the species.

Since his childhood, Cyril Casmeze has been obsessed with the  idea of imitating perfectly many animals, of being an animal.  In this performance, Jade Duviquet will question and call  out to Cyril Casmèze through a series of interviews carried  out among his relatives. How does his animality effect  his relationships with humans? And with animals? Cyril  Casmeze will respond live with words, movements, cries and transformations. A real and breathtaking diving into  the various animal identities…

Performance 2: Five Beasts
a collective work by Ned Rothenberg and Rinde Eckert
Five Beasts is a set of five portraits of the human animal as  it manifests itself in the classic behaviors of predator, prey,  ruminant, or scavenger, wolf, mouse, ox, ferret, vulture, dog,  or bear, the animal as totem, the animal as guide, the animal  as witness.  These animals put our pretensions in relief, or  challenge our grand anthropocentrism.  They inform us, teach,  if we listen.  We are absurd and amazed and sometimes  beautiful in our utter ignorance.

This event is presented as part of “Walls and Bridges,” a 10-day French-American arts and ideas festival curated by the Villa Gillet, a French cultural institute interested in thought in all its expressions, bringing together thinkers and artists from all over the world; and is co-presented with Les Subsistances, an international laboratory for live arts based in Lyon, France. www.villagillet.net