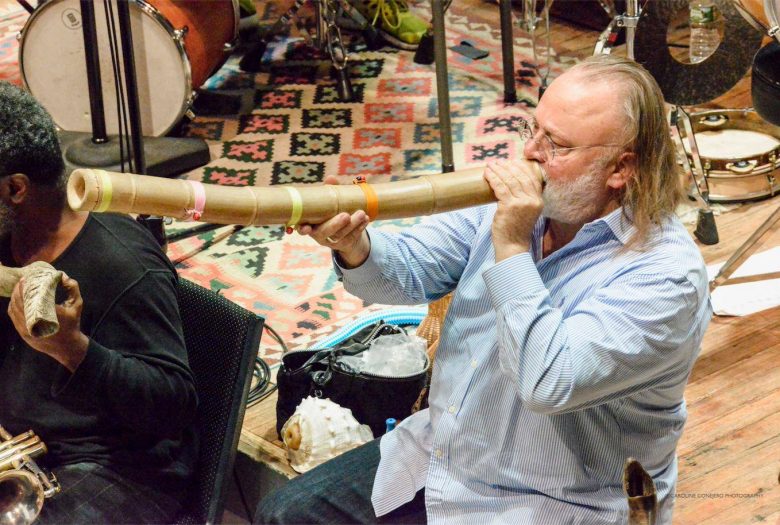 This evening’s concert coincides with the release of Rudolph’s new CD “Dream Garden” on Justin Time records. Interpretations of the compositions from the CD will be performed, as well a newly commissioned works. The new compositions performed this evening were created with support from Chamber Music America’s New Works: Creation and Presentation Program funded though the generosity of the Doris Duke Charitable Foundation.

The music of Adam Rudolph’s Moving Pictures heralds a new and vital direction in the evolution of American music. Grounded in the American improvisational tradition, the ensemble embraces music forms, languages, instrumentation, and cosmologies of Europe, Africa, the Middle East, Asia, and the African Diaspora. Decades of performance and research into these music cultures have given the artists the background and experience to create a unique and unprecedented improvisational art form.

Since 1991 Adam Rudolph’s Moving Pictures has performed at many major festivals and concert venues in both Europe and the United States. In addition, each member has concertized extensively throughout North and South America, Europe, Asia, Africa, and Australia: their collective background spans a wide range of musical experiences, including performances with world music ensembles, 20th century chamber groups and leading artists in the jazz and rhythm & blues fields. The concert repertoire consists of original compositions by Mr. Rudolph that serve as a basis for improvisational dialogue. About the Music Adam Rudolph writes: “I compose forms, which serve as thematic material to provide an orchestrated context for improvisational dialogue. Music materials consist, among other things, of original melodies, textural gestures, sound languages, tone rows, traditional and synthetic scales, diadic and intervallicaly generated harmonies, call and response, polyphony, dynamics, and the coloration of silences. Unique forms are generated through my concept of “Cyclic Verticalism”, whereby polyrhythms, as used in African music, are combined with rhythm cycles, as used in Indian music. When combined with the above-described tonal materials, larger forms can be generated. In my compositions these materials are utilized to serve emotional coloration; what in India is called Rasa. Performers are given the freedom to use their imagination and listening ability to develop the compositions within their own individual motion and timing, while still relating to the overall form and to their aesthetic and musical functions. The concept is to generate unusual relationships of sound against sound, form against form, and rhythm against rhythm in a non-linear, ever shifting kaleidoscope of music images.

Check out their review on allmusic.com!