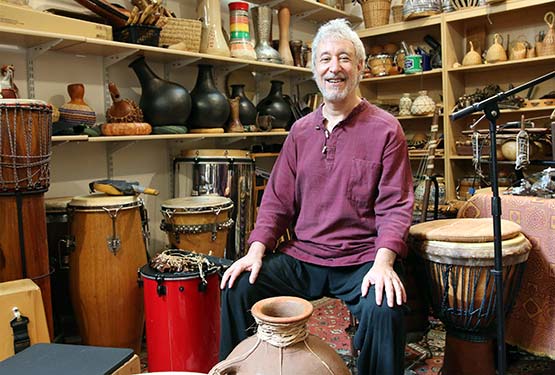 Adam Rudolph, originally from Chicago, has appeared at festivals and concerts throughout North and South America, Europe, Africa, and Japan over the past three decades. Since the 1970s, he has developed his distinctive syncretic approach to hand drums in creative collaborations with many masters of cross-cultural and improvised music such as Sam Rivers, Pharaoh Sanders, L. Shankar, and Fred Anderson. He is known especially for his innovative small group and duo collaborations with Don Cherry, Jon Hassel, Wadada Leo Smith, and Omar Sosa. In 1988, he began his association with the legendary Yusef Lateef, with whom he has toured worldwide and recorded 14 albums, including the large ensemble collaborations The World at Peace (1995), Beyond the Sky (2000), and In The Garden (2003). In 2001, Rudolph founded Go: Organic Orchestra, a 22-piece woodwind and percussion ensemble dedicated to developing his compositional and rhythm concepts in a large group format. Rudolph is known as one the early innovators of world music. In 1977, he co-founded the Mandingo Griot Society (with Gambian griot Foday Musa Suso), one of the first bands to combine African and American music. In 1988, he recorded the first fusion of American and Gnawa (Moroccan) music with sintir player-singer Hassan Hakmoun. Rudolph runs his own Meta Records label, and has received grants and commissions from the Rockefeller Foundation, Meet the Composer, the Mary Flagler Cary Trust, the National Endowment for the Arts, Arts International, the Durfee Foundation, American Composers Forum, and Chamber Music America.