Anjna Swaminathan: Rivers Above, Floods Below 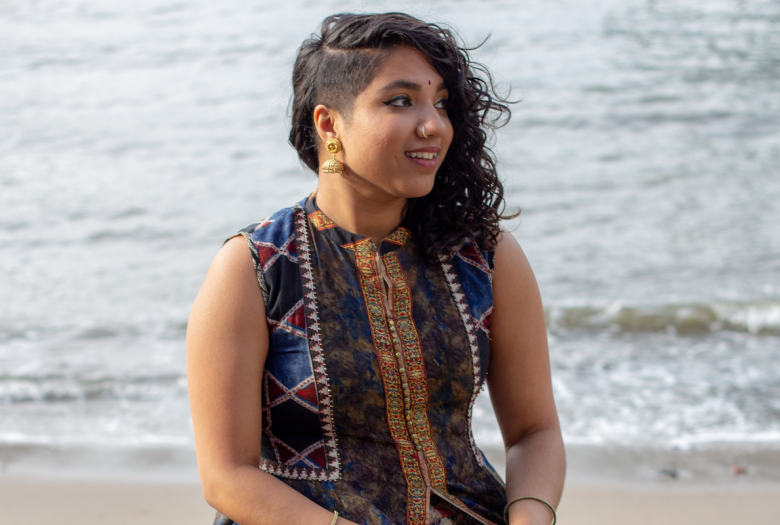 Anjna Swaminathan: Rivers Above, Floods Below

Rivers Above, Floods Below is the world premiere of two new works by Roulette Van Lier Fellow Anjna Swaminathan. The first, Anandham: A Homecoming, is a lengthy solo violin work written for and performed by violinist Hyeyung Sol Yoon. The second, We Assemble Below, is a song cycle written for an ensemble of stellar musicians and improvisers.

“The borders of bioregions are not only impossible to define; they are permeable. […] I remember that not only is my mother an immigrant, but that there is something immigrant about the air I breathe, the water I drink, the carbon in my bones, and the thoughts in my mind.” — Jenny Odell, How to Do Nothing

Odell’s words offer a reflection on the meteorological phenomenon of “atmospheric rivers,” large bodies of water which collect in the atmosphere above the tropics and later rain down in a different place entirely. Anjna Swaminathan’s Anandham: A Homecoming considers the possibility that much like these bodies of celestial water, our homes, too, are not stationary, but exist in the very possibility of our migration. Our global collective relies on a memory of homelands that have been colonized, spliced, and severed time and time again, but while we are so often nostalgic for a home that is broken, we more easily find community in new lands that don’t feel beholden to the same burdens of conflict and status quo. Much like the rivers brewing and creating movements above, Swaminathan considers the massive rivers of protestors who have flooded the streets against injustice in recent months. What if this, too, is a deluge of cosmic importance? Musically, Anandham: A Homecoming holds these mass movements in the body of a solo violinist. We journey with the violin through its own story of immigration, colonization, and subversion. Informed by Swaminathan’s training in western classical, Carnatic and Hindustani violin, her guru M. S. Gopalakrishnan’s uncanny ability to mold into and in between all three, as well as the historic effects of British colonization on the oral traditions of India, this work expresses the shared migration story of musics, communities, waters, activists, the violinist, and the composer herself.

Blossoming from the same hopes, dreams, and questions offered in Anandham: A Homecoming, this lush and loving song cycle seeks to offer nourishment and care to those who flood the streets with such courage. We live in a time where resistance has become second nature and where rebellion is an absolute necessity for survival. It is terrifying, marginalizing and isolating, while also being a testament to the power of collective listening, organizing, and rising. Moving between orchestrated compositions, free improvisation, poetry, and collective singing, this is a song cycle of laments, anthems, and lullabies for those at the front lines. This is a call for hope, for rest, and for deeper listening.

Both of these works emerge from Swaminathan’s ongoing research into the documentation of Carnatic and Hindustani ornamentation in western classical notation, which is generously supported by Roulette’s Van Lier Fellowship.

This performance was originally scheduled for Spring 2020 but was postponed and rescheduled due to Covid-19. Roulette’s Fall season will be presented virtually and available for free on a variety of streaming platforms. Our theater is currently closed for public performances as a result of the Covid-19 pandemic and the safety measures that Roulette has put in place to keep staff, artists, and the public safe.

Anjna Swaminathan is a queer multidisciplinary artist, composer, violinist, vocalist, writer, theatre artist, and dramaturg. As an artist with a passion for sociopolitical work, community building, and critical consciousness, her artistic practice is an extension of her activist spirit. Informed by her rigorous training in the Carnatic and Hindustani music traditions of India, Anjna creates in New York’s vibrant creative music and improvisatory scene, in hybrid classical compositional work, and in her own multidisciplinary projects. She is a disciple of violin maestro Parur Sri M. S. Gopalakrishnan and Mysore Sri H.K. Narasimhamurthy and continues her training in Hindustani music with Samarth Nagarkar. Since 2018, Anjna has been under the compositional mentorship of Gabriela Lena Frank with whom she is exploring the creative possibilities of using Western Classical notation as a mode of communication for her deeply rooted Indian classical compositional and improvisational ideas. As an educator, Anjna has a strong commitment to mindfulness-based music-making, socially conscious and empathetic principles, and expression-oriented rigorous practice.

Hyeyung Sol Yoon was a member of the Chiara Quartet, which celebrated its last season in 2018. They launched “Chamber Music in Any Chamber,” a project that brought the ensemble to over 50 clubs and bars across the U.S. and performed by heart, including the Complete String Quartets of Béla Bartók at the Ravinia Festival in 2016. Her discography includes a recording of Jefferson Friedman’s String Quartets, which was nominated for a Grammy Award in 2011, and Bartók by Heart, the Complete String Quartets of Béla Bartók, released in 2016. She traveled to South Korea in Spring 2019 to research the folk practices called madang performances and is a co-founder of Open Space Music, an online live series that she and her husband, cellist Gregory Beaver, launched in response to the pandemic in May 2020. It provides music and connection through live video calls, and performers are paid through sale proceeds. Hyeyung is also the founder of Asian Musical Voices of America, a platform created by and for Asian classical musicians.

Raised on the verge of several musical streams since her childhood, Lebanese violinist and composer Layale Chaker debuted her musical training at the National Higher Conservatory of Beirut in her native Lebanon. She later pursued her musical studies at Conservatoire de Paris and the Royal Academy of Music in London. “Inner Rhyme,” her debut release with her ensemble Sarafand, was listed as “Top of The World” by Songlines with a 5-star review, Top 10 NPR Best Releases, #1 for several weeks on the World Charts of iTunes and Amazon Music, and received features and praises by the New York Times, The Strad, Strings Magazine, Jazz World, and Rootsworld among others. Layale has appeared as a soloist, performer, improviser and composer in concerts, recitals and projects around Europe, the Middle-East, North and South America and Asia.

Pianist/Improviser Joey (Ian-Joe) Chang, obtained his B.M. and M.M. from the Juilliard School and is a recipient of the school’s 2018 Career Advancement Fellowship for professional artists. Following his residency as an improviser at the Banff Centre in the summer of 2017, Joey has performed free improvisation in venues including The Stone at the New School and St. John’s in the Village, and he has presented fully improvised concerts at the Sparkhill concert series and the Clayton Piano Festival in NC. Joey has composed structured improvisation for art installations as well as dance choreography performed at student choreography showcases at Marymount Manhattan College. He is co-founder, with violinist Katherine Kyu Hyeon Lim, of “The Moving Orchestra”, a collective that programs all-improvisation programs with musicians and dancers.

Memphis-bred, Grammy-nominated, Echo Award-winning bassist/composer Stephan Crump is an active bandleader with twelve critically-acclaimed album releases in addition to numerous film scoring contributions. Known for transforming his instrument into a speaking entity of magnetic pull, his focus on creative instrumental music has led to collaborations with many of the leading lights of his generation, most notably Vijay Iyer, in whose trio and sextet Crump plays a dynamic, founding role. He can also be heard as a long-standing member of Jen Chapin Trio, Ches Smith Trio, Rez Abbasi Acoustic Quartet, Liberty Ellman Sextet, Secret Keeper (duo with Mary Halvorson), his own Rosetta Trio (with Jamie Fox, Liberty Ellman), his Rhombal quartet (with Ellery
Eskelin, Adam O’Farrill, Tyshawn Sorey), as well as co-led ensembles with Kris Davis, Ingrid Laubrock, Cory Smythe, Eric McPherson, Mat Maneri, and Okkyung Lee.

Jasmine R. Wilson is a versatile American vocalist, educator, and media maker based in New York City. She trained in vocal performance at McGill University in Montreal, Canada, where she also hosted and produced several Canadian radio programs. She has taught music and English as a Second Language in France and Canada. Jasmine enjoys combining her international experience in music, improvisation, and media production into thoughtful educational exchanges in the arts. In New York City, Jasmine regularly performs classical works by underrepresented female composers and composers of color as a vocalist with The Dream Unfinished (TDU), an activist orchestra. Through TDU, she has collaborated with Lincoln Center, Carnegie Hall, and the DiMenna Center. Internationally, Jasmine has appeared with Canadian funk/R&B bands What It Is, the Morphtet, Freak Motif, and Kalmunity. While in Montreal, Jasmine hosted Soul Perspectives on CKUT 90.3 FM, as well as produced multiple radio programs for CJAD 800 Radio and the Kelly Alexander Show.

Anjna Swaminathan is a Roulette 2020 Van Lier Fellow, made possible with funds provided by the Edward and Sally Van Lier Fund of the New York Community Trust. This performance is presented through Roulette’s GENERATE program, providing over 30 artists each year with in-depth creative and technical support.

Anandham: A Homecoming is commissioned in part by the Gabriela Lena Frank Creative Academy of Music.