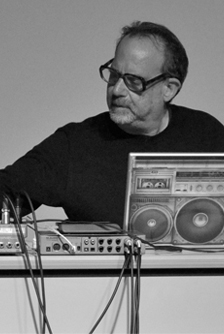 Electronic minimalist pioneer Carl Stone presents several sections from his full-length piece, FUJIKEN, and shares the stage with guests guitarist Elliott Sharp and accordionist Shoko Nagai in exploratory improvisations. FUJIKEN, is based largely in part from a series of field recordings Stone made in Japan, Thailand, Cambodia and Vietnam in 2011 and 2012. A work for solo computer and electronics, FUJIKEN fully captures the artist’s fertile imagination: combining a richly dense ambient foundations of found-sounds with layers of electronic manipulation. In the second act, Stone, Sharp, and Nagai explore the dynamic interplay of chaos and harmony/ambience and drone that emerges from free, collective improvisation.

Carl Stone is one of the pioneers of live computer music, who first employed computers in live performance in 1986, and has been hailed by the Village Voice as “the king of sampling” and “one of the best composers living in (the USA) today.” He has used computers in live performance since 1986. Born in Los Angeles, Stone now divides his time between California and Japan. He studied composition at the Cal Arts with Morton Subotnick and James Tenney, and has composed electro-acoustic music almost exclusively since 1972. In addition to his schedule of performance, composition, and touring, Stone is on the faculty of the Information Media Technology Department, School of Information Science and Technology at Chukyo University in Japan.
sukothai.com