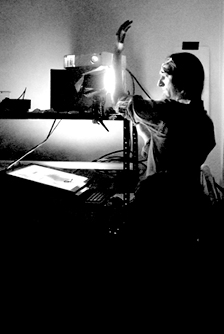 A Wind Blowing On Us FOR ROULETTE is created specifically for the architecture of Roulette’s performance space, based on the original work, A Wind Blowing On Us, which is inspired by Candomblé ritual dancing of the African diaspora through the conceptual lens of philosopher Gilles Deleuze’s ontology of the body. The work will be danced by Elise Knudson, Melissa Guerrero and AstonK to the music composed and performed by Geoff Matters.

A Post-Performance Fun – A Hang Out Among Artists & Audience

A “Hang Out” is a social forum where artists and the public can socialize about their work and lives. An informal and engaging environment, you and the artists literally “hang out” and can have a conversation. Our Hang Out will begin immediately after the performance.

Be free; be open. If you want the artists to demonstrate something about what you saw,  just talk to them about it and see what happens.

Join us after the performance: Let’s hang out!

Geoff Matters (Composer, Musician) uses his own software “GDAM” along with innovative homemade and repurposed physical controllers in live and interactive music performances, under his real name or the aliases GeoffGDAM and Lance Blisters. As a founder of “Share” forum and open jam for audio and video artists, he helps provide a weekly opportunity to explore developments in live, collaborative, and experimental art, as well as a venue for performances by local and touring artists. As LANCE BLISTERS he performs live Jungle, Breakcore, Punk, and Noise using MIDI Guitar and Microphone, using custom software to create cutup political anthems: a new and unique blend of songwriting, live performance and electronic music. Matters has performed throughout the US, Europe and Japan. Geoff has composed and performed music and video for dance pieces by Koosil-ja/Dance KUMIKO, including mech[a]OUTPUT(2003) deadmandancing EXCESS(2004) public sleep/Sleepover(2004, 2005) Live Processing (2006) Dance Without Bodies (2006) Blocks of Continuality (2010) and Invisible/Visible (2012). Matters has received grants from Experimental Television Center and Meet The Composer and a commission from American Music Center Live Music For Dance.

Koosil-ja (Choreographer) has received fellowships from NEA, NYFA, Guggenheim Foundation, Asian Cultural Council, a “Bessie” award, and LMCC President Award. Koosil-ja’s works have been presented and commissioned at The Kitchen, Aaron Davis Hall, Performance Space 122, Performing Garage, Danspace Project, Lincoln Center Out-of-Doors, Central Park SummerStage, Whitney Museum of American Art at Altria, Japan Society, and Dance Theater Workshop, among others. She has also been presented nationally and internationally. She has taught and lectured in USA, Netherlands, Germany, Portugal, Japan, and Mexico. In 2012, she lectured about “Ecology of Image of Body” with Geoff Matters at Rikkyo University, College of Contemporary Psychology, Body Expression and Cinematic Arts. She also works with The Wooster Group. She graduated with a Master of Science degree in Integrated Digital Media Polytechnic Institute from New York University in 2008.
dancekk.com
facebook.com/pages/koosil-jadanceKUMIKO/537850586254252