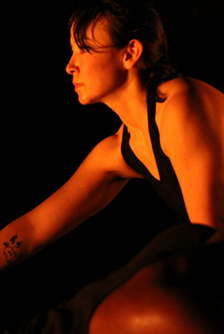 zero…sixty examines accelerative gestures in movement and music within varying temporal frameworks in a collective creation. 60 seconds to 60 years in 60 minutes.

“Ms. Donohue is a compelling presence, and a fierce one. ” –The New York Times

Maura Donohue has been making dance-based performance works in NYC since 1995. Her solo and inmixedcompany group works have been produced and presented in NYC at Dance Theater Workshop (now NY Live Arts), PS 122, Danspace Project, La Mama, and Mulberry St. Theater and have toured across the US and to Canada, Europe and Asia. She is an assistant professor in dance at Hunter College, writes for Culturebot, and serves on the NY Dance and Performance Awards (Bessies) committee and Movement Research’s artist advisory council. She has collaborated with Adam on projects for La Mama Moves, The Asia Society, and Pioneers Go East Collective.
inmixedcompany.com

Adam Cuthbért is a composer/performer and Michigan native who cross-breeds acoustic instruments with digital environments. Highly interested in the evocative qualities of sounds in nature, Cuthbért is experimenting with ways to use composed music to both synthesize and supplement the aesthetics of a natural environment. As an Ableton Live practitioner and trumpeter, he has performed new works around the United States and Japan, at (le) poisson rouge, La MaMa ETC, Chashama, and the Incubator, and alongside performers such as eighth blackbird, Sō Percussion, Dennis DeSantis and Maura Donohue. His co-commission with Daniel Rhode, several rooms away from their source, premiered simultaneously in the UK, Netherlands, and US in the 2012 London Cultural Olympiad. Some recent and ongoing projects include scores for experimental opera-theatre, a trumpet/electronica solo project, and the Sight/Sound project, an audio-visual collective based on collaborative composing over the internet and through the lens of technology.
sightsoundmusic.com/artists/adam