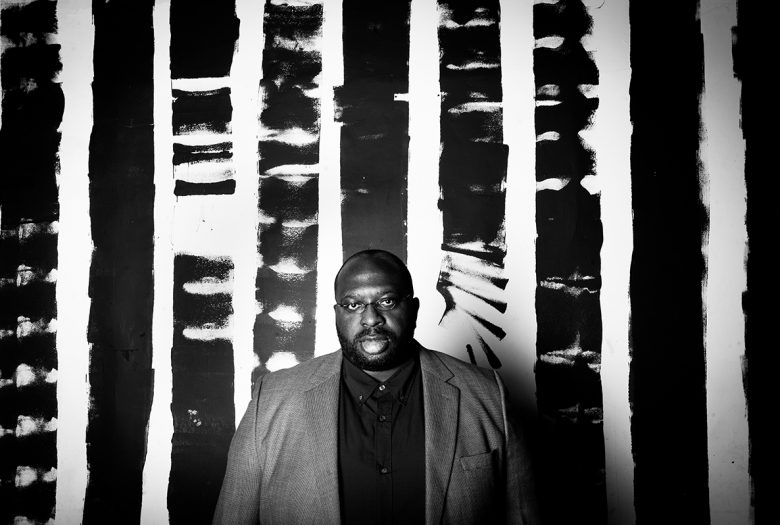 Darius Jones’ Samesoul Maker is the second installment of a three-part work utilizing a new language and compositional approach fully created by Jones. This evening’s presentation will be a 25-minute preview of the work-in-progress. For his 2014 compositional debut at Carnegie Hall, Jones presented the second iteration, The Oversoul Manual, an a cappella work comprised of 15 pieces performed by his vocal quartet, the Elizabeth-Caroline Unit. An elemental part of Jones’ Mani’sh Boy mythology, the piece is a fully illuminated, radical expression of Jones’ profound love for the voice, which remains at the foundation of his creative life.

Samesoul Maker explores the commitment of the father figure during the process of childbirth on the planet Or’gen. The father figure becomes the Samesoul Maker through a daily mantra performed in a 15-part cycle using an ancient instrument to embroider the repetitions. Each cycle is seeding the love, desires and support of the father for the creation of his child. The father figure repeats this action every day to lend psychic and emotional energy, thus strengthening the bond being created amongst the mothers of his Unit as they sing The Oversoul Manual.

Samesoul Maker will be proceeded by LawNOrder (pronounced “law no order”), a new 45-minute game piece dealing with social justice and American history. Each player represents a separate character (unknown to the other players) and is handed a law to follow at the beginning of the piece.

Darius Jones is a critically acclaimed alto saxophonist and composer. In 2008, Jones was awarded the Van Lier Fellowship by Roulette, which he used to launch his chamber ensemble, the Elizabeth-Caroline Unit, a project dedicated to new works for voice. Roulette continued their support for Jones’ work through a Jerome Foundation Commission, awarding Jones an Artist-in-Residence opportunity for the Elizabeth-Caroline Unit to premiere his vocal composition, The Oversoul Manual, in spring 2014. Following that performance, Jones made his compositional debut at Carnegie Hall with The Oversoul Manual in October 2014. In 2013, Jones was nominated for Alto Saxophonist of the Year, and for Up & Coming Artist of the Year two years in a row by the Jazz Journalists Association Jazz Awards. He was one of Jazz Times’ Debut Artists of the Year for 2009, and his 2012 release, Book of Mæ’bul (Another Kind of Sunrise), was listed among NPR’s Best Top 10 Jazz Albums of that year. Critics have called him “robustly creative” (New York Times) and “one of NYC’s most incisive and passionate saxists” (Time Out New York). Jones has collaborated with Gerald Cleaver’s Black Host, Oliver Lake Big Band, Eric Revis Quartet, Nasheet Waits Quartet, Trevor Dunn’s Proof Readers, Matthew Shipp, Branford Marsalis, Jason Moran, and more.