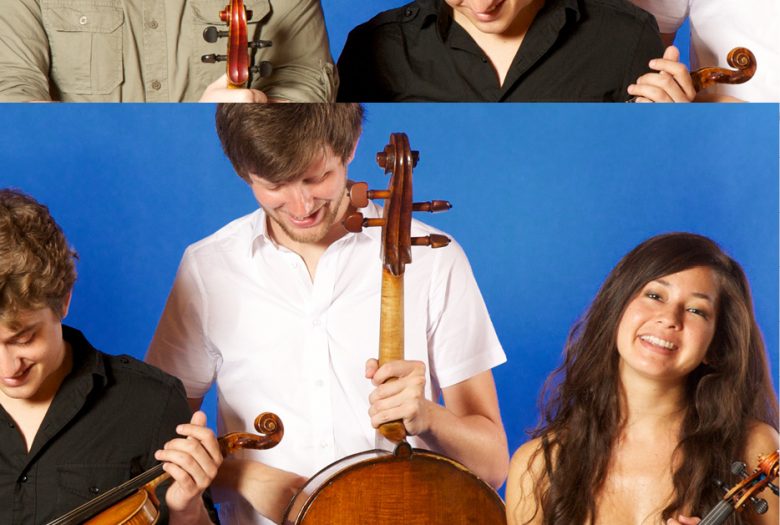 “The Aeolus Quartet is a powerful and thoughtful group of young musicians who are plotting an ascending course… this vibrant group shows great promise.” –The Austin-American Statesman

Praised by Strad Magazine for their “high-octane” performance, the Aeolus Quartet has been snatching up prize after prize for their powerful and insightful playing. A mixed-media concert, Appalachian Portraits features the graduate resident string quartet at Juilliard performing selections from their highly-acclaimed CD, Many-Sided Music, on Longhorn/Naxos (“a welcome indication of the creativity and potential of Aeolus as well as that of the composers” –New Music Box). Capturing an irresistible and bittersweet Americana flavor, in this program Aeolus perform alongside projections of the controversial portrait photography of Shelby Lee Adams, a Guggenhein Fellow, best-known for his raw portraits of Appalachian inhabitants.

This diverse program centered on American folk music begins with the immediately engaging, blues-inspired string quartet Black Bend by Dan Visconti, and continues with Alexandra Bryant‘s hauntingly beautiful Lady Isabelle Was That Kind of Woman. The first half of the program concludes with Louis Andriessen‘s Facing Death, a fast-paced, visceral masterwork from 1990 which takes Charlie Parker’s bebop riffs and manipulates them in a myriad of ways.  This year marks the 75th Anniversary of Andriessen’s birth.

The second half of the program includes the music of Hungarian composer Bela Bartok, one of the earliest composers to seamlessly integrate authentic folk styles into art music. Bartok’s sixth and final quartet, premiered at the Town Hall in New York in 1941, explores sounds ranging from the bizarre and ironic to the most intimate and personal writing of his output. The evening closes with the companion piece of Lady Isabelle, Steven Snowden‘s Appalachian Polaroids, a work originally inspired by a set of Shelby Lee Adams’ gritty portraits. This innovative piece directly incorporates the sounds of the Appalachian folk tradition through an integrated 1976 field recording of the song Black is the Color. For the first time, the field recording and live performance will be merged onstage with a collection of Adam’s portraits, to stunning effect.

Shelby Lee Adams will be in attendance at this performance and will speak about his work. His books will be available for purchase and signing.

Since its inception in 2008 at the Cleveland Institute of Music, the all-American Aeolus Quartet has quickly risen to the ranks among the finest young string quartets performing today. Named for the Greek god Aeolus, who governed the four winds, the Quartet pursues their art through idea of a single spirit uniting four individual forces serves, and together have been awarded prizes at nearly every major competition in the United States: Grand Prizewinners of the Plowman Chamber Music Competition (2011) and Chamber Music Yellow Springs Competition (2011), First Prize at the Coleman International Chamber Ensemble Competition (2009), a Silver Medal at the 2011 Fischoff International Chamber Music Competition, and a Bronze Medal at the 2010 International Chamber Music Ensemble Competition in New England. Members of the Quartet hold degrees from the Peabody Conservatory, the Cleveland Institute of Music, and the University of Texas at Austin, where they served as the first Graduate String Quartet-in-Residence, and the Aeolus currently holds the post of Graduate Resident String Quartet at the Juilliard School.
http://aeolusquartet.com

Shelby Lee Adams first encountered the communities of the Appalachian mountains as a child, while accompanying his doctor uncle on his rounds. In the mid-1970s he started to photograph in the region, using a 4 x 5 camera, gaining and building a special trust among its often impoverished people, who have tended to not always welcome would-be documentarians. Adams not only records their lives and hardships with great empathy, but also depicts the grace and humanity of his subjects, photographing with an ease evident in the results. Shelby Lee Adams is the author of four photography books, Appalachian Portraits (The University Press of Mississippi, 1993), Appalachian Legacy (The University Press of Mississippi, 1998),  Appalachian Lives (The University Press of Mississippi, 2003), and Salt and Truth (Candella, 2011). The recipient of a 2010 Guggenheim Fellowship, he has held a fellowship from the National Endowment for the Arts and a NEA survey grant, and has received artist support grants four years consecutively from the Polaroid Corporation, the Elizabeth Firestone Graham Foundation, and the Peter S. Reed Foundation.  Adams’ photography has been collected and exhibited by over 60 national and international public museum collections and numerous private collections: the Musee De L’Elysee Lausanne, Lausanne, Switzerland, The National Gallery of Canada, Ottawa, Whitney Museum of American Art, NYC, and The Amon Carter Museum, Fort Worth, TX. Adams divides his time between his home in the Berkshire Mountains of Western Massachusetts and Eastern Kentucky.
shelby-lee-adams.blogspot.com

Ear Heart Music “has become a staple in the New York new music soundscape.” (Time Out NY) Since September 2009, Ear Heart Music has produced over 75 unique concerts with over 60 world premieres. Its thoughtfully designed programs highlighting recent masterworks stimulate creative thought and instill new avenues of perspective in the listener. The consistent level of intelligent and inspiring music-making resonates in the mind and body. Shows include electronic processing, performance art, visual art, film, and dance, providing deeper context for the music. Unique artist pairings, diverse programming, and the integral incorporation of new work all contribute to Ear Heart Music playing a major role in reshaping the chamber music landscape for the 21st century.