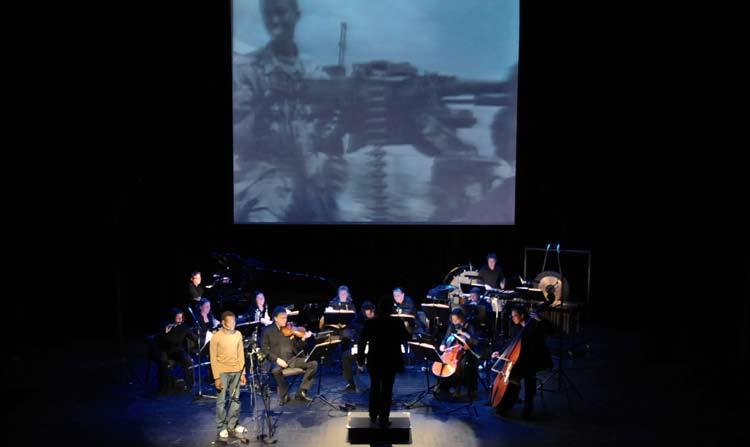 “An awe-inspiring… compassionate and totally involving creation… a War Requiem for the modern day, one which held the audience stunned – until the standing ovation at the end.” – The Birmingham Post

Strange News tells the story behind the news – about youths drawn into militias and gangs, about the associated violence and terror, about forces breaking down the ability to feel – and finally the path to healing and empathy.

With a reputation for superb performance and ambitious programming, Canada’s Aventa Ensemble returns to Ear Heart Music with the New York premiere of Rolf Wallin’s Strange News as part of their 2014 winter tour. Norwegian composer Rolf Wallin and Ugandan actor Arthur Kisenyi join Aventa in the presentation of this work, which features live video and electronics, surround sound and the participation of local media. These concerts also include works from remarkable Canadian composers Zosha di Castri and Christopher Butterfield.

Strange News focuses on the subject of children who are used so utterly and cynically as soldiers – the so-called “child soldiers.” In recent years, aid programs have attempted to reintegrate former child soldiers into society. One great challenge to reintegrating these children is that the social ties to their own community were often brutally cut when they were forced to commit atrocities not only to their own tribe, but often to their own family. Therapy for recovery includes local, traditional rituals which focus on the individual as a part of the collective, with song and dance as important ingredients. This therapy has proven successful and offers a glimpse of hope into one of the darkest, ongoing chapters of African contemporary history.

Strange News is cast in five sections. A newscaster  introduces the first section, News, which features authentic video footage of children fighting in African conflicts. A manic, distorted version of the intense music that accompanies television news broadcasts plays during this section. In the second section, Strange, the narrator tells his own terrible story of how, as a young boy, he was pressed into the service of the army that attacked his village. The third section, Life Like Water, begins as the sounds of war dissolve into an electroacoustic landscape. The narrator, deserted by the musicians who have fled the stage, presents a monologue in which he compares life and water – nourishing and cooling, but also dangerous and filthy. At last, in the fourth and fifth sections Singing and Dancing and Home, the narrator returns to his village.

Aventa, founded in 2003, is a Victoria-based ensemble under the artistic direction of Bill Linwood, is comprised of musicians who are passionate about new music and its place in our culture. Aventa regularly commissions both Canadian and international composers and has presented premieres of over 100 works both in Canada and on tour. Aventa recently embarked on its third international tour with performances in Sweden, Denmark, Germany and New York City. Highlights included appearances at Denmark’s Athelas New Music Festival and the European premiere of celebrated Canadian composer, Gilles Tremblay’s À quelle heure commence le temps? In February, Aventa embarks on its seventh national tour, with performances and workshop activity in Montreal, Winnipeg, Calgary and New York City. Hailed as “a superb contemporary-music ensemble” (Globe and Mail), Aventa is amongst Canada’s finest musical ambassadors. In a continuing commitment to Canadian repertoire, Aventa presented 25 Canadian works and 10 premieres over the last year. Other recent highlights included a week-residency with Sir Peter Maxwell Davies as the ensemble presented the world premiere of his 2011 work Stormwatch, Stormfall, written for Aventa. The ensemble has been fortunate to receive generous support from all three levels of government and is encouraged by support received from Foundations, international support, private donors, sponsorship and our growing audience.

Ear Heart Music “has become a staple in the New York new music soundscape.” (Time Out NY) Since September 2009, Ear Heart Music has produced over 75 unique concerts with over 60 world premieres. Its thoughtfully designed programs highlighting recent masterworks stimulate creative thought and instill new avenues of perspective in the listener. The consistent level of intelligent and inspiring music-making resonates in the mind and body. Shows include electronic processing, performance art, visual art, film, and dance, providing deeper context for the music. Unique artist pairings, diverse programming, and the integral incorporation of new work all contribute to Ear Heart Music playing a major role in reshaping the chamber music landscape for the 21st century.

April 22, 2014: American Opera Projects & the American Modern Ensemble with Hai-Ting Chinn
This performance features two world premieres in a pairing of provocative chamber opera dealing with the duality and interconnectedness of spirituality and sexuality: Wanton Sublime by Tarik O’Regan, and The Companion by Robert Paterson. The “comprehensive and nuanced” (culturebot) Mallory Catlett directs.

June 2014: Momenta Quartet – Ghost Opera
In a rare performance of Tan Dun‘s Ghost Opera for string quartet and pipa with water, metal, stones, and paper, new music veterans the Momenta Quartet recall the haunting magic of Chinese peasant shamans. The composer describes this work as a reflection on human spirituality, too often buried in the bombardment of urban culture and the rapid advances of technology.