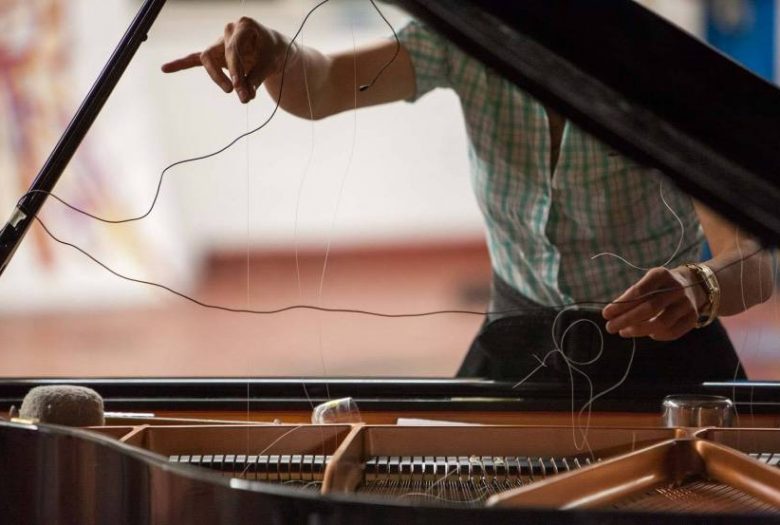 Pianist Heleen Van Haegenborgh and electronic composer Esther Venrooy join forces in a project that explores the synergy of acoustic piano with electronica and digital sound processing. Both musicians are keen collaborators and have worked extensively with different media. Van Haegenborgh has collaborated with electro-acoustic outfits like Tape Tum and KÃ¶hn and she has provided a live soundtrack for Nam June Paik’s “Zen for Film”. Venrooy collaborated with pianist Frederic Croene and pipa virtuosa Min Xiao-Fen and has created works for choreography as well as sound installations. Their collaboration aims to draw the listener into the inner workings of the piano. Armed with a battery of microphones they set out to find hidden sounds within the piano. Resonating elements and tiny inaudible mechanical sounds are captured, manipulated and magnified through electronic means, resulting in fragile textures where the boundaries between electronic and acoustic
sound become blurred.

Esther Venrooy (Â°1974, Rosmalen, The Netherlands) is a composer and sound artist working in the field of electronic music. After completing studies in classical saxophone, Venrooy attended the European Dance Development Center (Arnhem) as a composer in residence, where she began employing electronic and digital techniques in pieces aimed at choreography and stage performance. Gradually her music evolved into an independent means of expression and she continued her work with electronica at the IPEM (Institute for Psycho-acoustics and Electronic Music) in Ghent, Belgium where she still resides. At this time she started utilizing film editing paradigms as a foundation for her personal composition methods. Her works range from purely electronic composed music to improvised combinations of electronica with traditional instrumentation such as piano, flute and satsuma-biwa. She has created site-specific works as well as multimedia performances and installations. Much of her music has been released on CD or vinyl and has received good critical acclaim. Esther Venrooy has performed her music extensively for audiences in cities such as Antwerp, Amsterdam, Brussels, Berlin, Madrid, Hamburg, Cologne, Washington DC and The Hague. Upcoming concert destinations include New York, Dusseldorf, Berlin and Rotterdam. Apart from her artistic activities, Venrooy is a lecturer on 20th century music and experimental arts at the Ghent school of fine arts, where she also runs the audio workshop. Together with her husband she runs Odradek – an organization that curates events, releases and concerts dedicated to sound art and innovative or experimental music. Venrooy also presides the board of (k-raa-k)3 organization.

Heleen Van Haegenborgh (Â°1980, Gent, Belgium ) studied piano at the Ghent conservatory with Claude Coppens and Daan Vandewalle. The improvisation lessons with Godfried Willem Raes (Logosfoundation.org) were crucial for her musical development. She followed master classes with
Jan Michiels, Boyan Vodenicharov, Louis Pas, John Tilbury, Luc Vaes, and Claire Chevalier. Her musical activities are a series of different projects where new music and extended techniques on piano are the starting-point. She’s trying to develop projects in which she brings new experimental music approachable for a wider public without doing concessions on the difficulty of the pieces. This happens through eg. working with other media ( ‘Songbooks’ and ‘Zen for film’),
recovering the original function of the music ( ‘Re:construction’), adapting the environment on the contents of the music (“contcont”)”¦