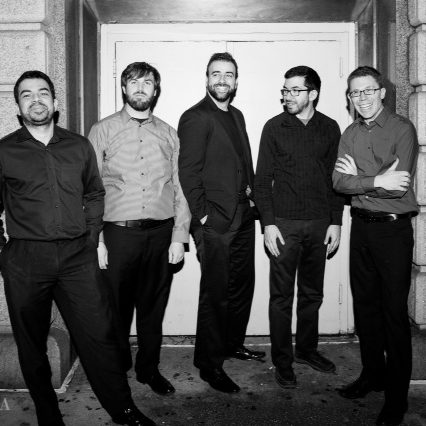 2 rounds from Long before I dance under those lights: (world premiere)
for two boxers and four percussionists

Long before I dance under those lights is a working title of a new musical theater work being developed for Iktus. Far from the more obvious drama of the ring, this operatic scene for boxers and percussionists takes its title from Muhammed Ali’s quote in which he explains that match outcomes are decided during the grueling hours of a fighter’s training. The scene focuses on the parallels between the rigor of the training of both musicians and boxers, with extremely complex music and text based on the sounds and stories overheard in gyms during Pinto’s time in Glasgow and Jersey City. This performance will feature an introduction and three 3-minute rounds separated by 30-second instrumental interludes.

Contrasting the verbose and virtuosic dramatic scene will be Cataract, a meditative work for multiple drum kits positioned around the hall, surrounding the audience. The result is a stunning continuous cascade of rolls, highlighting the overtones and distinct timbres of the kit.

Also on the program, a miniature for vocalizing percussionist (mini_007) and a virtuosic scene for four very quick speakers Hack It! from Paul’s upcoming opera-in-development Thomas Paine in Violence which is being developed at the HERE Arts Center in New York and is slated to premiere in 2017.

Paul Pinto creates and produces experimental music and theatrical works in traditional and non-traditional spaces, and is the founder and co-director of ensembles thingNY and Varispeed. His own compositions blend chamber music with theatre with a focus on total performativity. Specifically, his work centers on the human voice and the endurance of the human body. Paul has chosen to work equally with traditional instruments, lo-fi electronics, unconventional sound-makers and amateur musicians, creating one-minute opera, concert length chamber music, and durational performance art. Paul is currently a member of the HERE Artists Residency Program (HARP), where he is developing a new opera for 2017 called Thomas Paine in Violence. www.pfpinto.com

Based in New York City, Iktus Percussion is an ambitious, dynamic young ensemble committed to expanding the boundaries of the percussion genre. Iktus is a collective-based operation, featuring an array of industrious and multi-talented percussionists with Chris Graham, Justin Wolf, Josh Perry, Sean Statser, and Piero Guimaraes at the core. As a group with strong ties to the local artistic community, Iktus is dedicated to collaboration with emerging artists, having commissioned over fifty new works for percussion from such composers as Angélica Negrón, Aaron Siegel, Lisa R. Coons, Jenny Olivia Johnson, Stefan Weisman, and Billy Martin (of Medeski, Martin and Wood), among others.

Iktus Percussion vs. Paul Pinto is part of series of performances supported, in part, with funds from GENERATE: The Frances Richard Fund for Innovative Artists of Promise. GENERATE, instituted in celebration of Roulette’s 35th Anniversary in 2013, aims to provide immediate, practical assistance to artists, helping them achieve ambitious work to be presented in our theater. Click here for more information about how you can contribute to GENERATE.