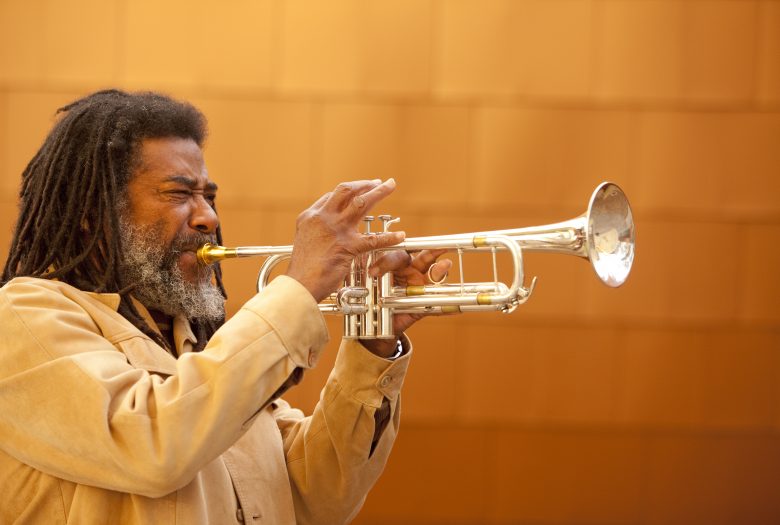 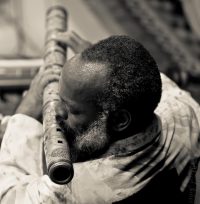 Wadada Leo Smith (Leland, Mississippi, 1941) Trumpeter and multi-instrumentalist, composer and improviser Smith has been active in creative contemporary music for over forty years. Born in Leland, Mississippi, Smith’s early musical life began in the high school concert and marching bands. At the age of thirteen, he became involved with the Delta Blues and Improvisation music traditions. He received his formal musical education with his stepfather Alex Wallace, the U.S. Military band program, Sherwood School of Music, and Wesleyan University. Mr. Smith has studied a variety of musical cultures: African, Japanese, Indonesian, European and American. He has taught at the University of New Haven, the Creative Music Studio in Woodstock, NY, and Bard College. He is currently a faculty member at The Herb Alpert School of Music at California Institute of the Arts. He is the director of the African-American Improvisational Music program, and is a member of ASCAP, Chamber Music America, and the Association for the Advancement of Creative Musicians. Mr. Smith’s awards and commissions include: MAP Fund Award for “Ten Freedom Summers”, Chamber Music America New Works Grant, Fellow of the John Simon Guggenheim Memorial Foundation, Other Minds, Djerassi Foundation Fellowship, FONT (Festival of New Trumpet) Award of Recognition, Jazz Journalists Association Jazz Award, Islamic World Arts Initiative of Arts International, Fellow of the Civitela Foundation, Fellow at the Atlantic Center for the Arts, Meet the Composer/Lila Wallace-Reader’s Digest Commissioning Program, Asian Cultural Council Grantee to Japan, New York Foundation for the Arts Fellowship in Music, Numerous Meet the Composer Grants, and National Endowment for the Arts Music Grants. A consistently adventurous trumpeter who has been able to focus on playing his own distinct music throughout his career, Smith joined Chicago’s AACM in 1967 and soon helped to found the Creative Construction Company, an innovative trio with violinist Leroy Jenkins and multi-instrumentalist Anthony Braxton. Smith formed the New Dalta Ahkri in New Haven, CT, an influential if under-documented band that at times included Henry Threadgill, Anthony Davis, and Oliver Lake. Mr. Smith founded the Kabell label in 1971, which has released many albums since that time. Smith has also recorded for Freedom, Moers, ECM, Nessa, FMP, Black Saint, Sackville, Pi, Tzadik, and Cuneiform, in settings ranging from unaccompanied solos to orchestra.

Douglas R. Ewart, while best known as a composer, improviser, sculptor and maker of masks and instruments, is also an educator, lecturer, arts organization consultant and all around visionary. In projects done in diverse media throughout an award-winning and widely-acclaimed 40-year career, Mr. Ewart has woven his remarkably broad gifts into a single sensibility that encourages and celebrates – as an antidote to the divisions and compartmentalization afflicting modern life-the wholeness of individuals in culturally active communities. In America, his determination to spread his perspective is part of the inspiration behind his often multidisciplinary works and their encouragement of artist-audience interactions. It is also the basis of the teaching philosophy with which he guides his classes at the School of the Art Institute of Chicago, where he has taught since 1990, and the basis of the perspective he has brought to his service on advisory boards for institutions such as The National Endowment for the Arts, Meet the Composer (New York City) and Arts Midwest. Mr. Ewart uses his past experience as chairman of the internationally renowned Association for the Advancement of Creative Musicians (AACM) to celebrate and build upon the history and achievements of the organization, and is from this perspective a natural extension of the activities he has been engaged in for the past four decades. Ewart leads many of his own ensembles, including Nyahbingi Drum Choir, the Clarinet Choir, Douglas R. Ewart & Inventions, Douglas R. Ewart & Quasar and Douglas R. Ewart & Stringnets.