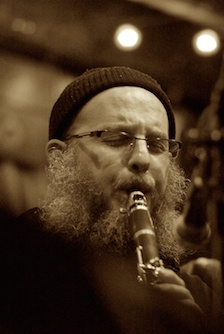 not seeing
the room is white
until that red apple

This brazenly clear haiku by American poet Anita Virgil was the inspiration for James Falzone to form The Renga Ensemble, a gathering of six of the most adventurous and diverse clarinetists/saxophonists working in jazz and improvised music today. The project, named after a centuries old Japanese poetic practice where two or three poets blend their words into a single meditative work, is rooted in the personal voice of each member and the fertile ground that grows between the composed and the improvised.

The Renga Ensemble will be playing music from their recently released recording The Room Is as well as the premiere of new compositions Falzone has created especially for this nine-city US tour.

Multi-faceted clarinetist/composer James Falzone is an acclaimed member of Chicago’s jazz and creative improvised music scene, a veteran contemporary music lecturer and clinician and an award-winning composer who has been commissioned by chamber ensembles, choirs and symphony orchestras around the globe. He leads The Renga Ensemble and Allos Musica and has released nine highly regarded recordings on Allos Documents, a label he founded in 2000. James has performed in recital halls, festivals and jazz venues throughout North America and Europe, appears regularly on Downbeat magazine’s Critics’ and Readers’ Polls, and was nominated as the 2011 Clarinetist of the Year by the Jazz Journalist Association. His work has been featured in the New York Times, The Chicago Tribune, New Music Box, Point of Departure, and many other publications. Educated at New England Conservatory, James is a respected educator himself and is currently a Senior Lecturer at Columbia College Chicago and a research fellow at The Center For Black Music Research.