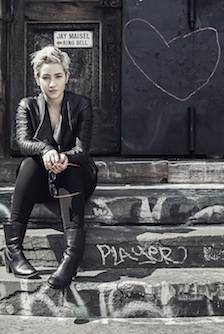 Vicky Chow, Jennifer Choi, and Michael Nicolas, some of New York’s most sought after musicians in the new music scene team together to perform new solos and trios by two dynamic composers, Danielle Eva Schwob and John Zorn. Premiering tonight are Danielle’s Three Self Portraits inspired by the art work of David Hockney, Lucian Freud, and Francis Bacon along side John Zorn’s first and latest piano trios, Amour Fou and The Aristos–ten metaphysical ambiguities for violin, cello, and piano in what will be an intense and enchanting evening of chamber and solo music.

The world premiere of Three Self Portraits, an introspective ‘triptych’ of solo pieces by award-winning composer Danielle Eva Schwob that draws inspiration from the works of David Hockney, Francis Bacon and Lucian Freud. Distinct in aesthetic but unified by the confident yet melancholic undertone of their portraiture, the three painters had a palpable influence on one another’s work, socializing frequently and often sitting for portrait sessions.

Functioning as a score to the self-portraits of these seminal English artists, this intimate piece is scored for solo violin, solo cello and solo piano, and each movement corresponds to a different painting and can be performed either as a standalone work or as part of a larger composition. Like the artworks, the solos are unique in their mood, style and perspective yet aligned by a sense of intimacy and pensiveness that is echoed by the work’s sparse instrumentation–a conscious choice that renders the lone performer as vulnerable and exposed as a painter crafting a self-portrait.

Three Self Portraits was commissioned by The American Composers Forum’s JFund.

About the Artists
Canadian pianist Vicky Chow has been described as “brilliant” (New York Times) and “one of the new stars of new music” (Los Angeles Times). Joining the All-Stars in 2009, she is now also a member of New Music Detroit, X88, and GRANDBAND. Her recording of Steve Reich’s ‘Piano Counterpoint’ has recently been released under the Nonesuch label and her next solo album featuring a newly commissioned evening length work by Tristan Perich titled ‘Surface Image’ for solo piano and 40 channel 1-bit electronics will be released in October 2014 under New Amsterdam Records. Her next projects include commissions from American composers Chris Cerrone, Molly Joyce and Canadian composer Adam Basanta. Ms. Chow also produces and curates “Contagious Sounds”, a new music series focusing on adventurous contemporary artists and composers in New York City. She receives continuous support from the Canada Council for the Arts and has received grants from the Aaron Copland Fund, Yvar Mikhashoff Trust, Fromm Foundation, Vancouver Foundation, and the BC Arts Council. Originally from Vancouver Canada, Ms. Chow studied at The Juilliard School with Yoheved Kaplinsky and Julian Martin before continuing studies at Manhattan School of Music with Christopher Oldfather. Starting the piano at age 5, she was invited to perform at the age of 9 at the International Gilmore Music Keyboard Festival. She made her orchestral debut at the age of 10 with the Vancouver Symphony Orchestra made her NY orchestral debut appearance at Alice Tully Hall with the Juilliard Symphony. Ms. Chow is based in Brooklyn. www.vickychow.com

Violinist Jennifer Choi has charted a career that breaks through the conventional boundaries of solo violin, chamber music, and the art of creative improvisation. Recognized on multiple occasions by the New York Times as a performer that is “soulful, compelling… with brilliance, and command,” Jennifer brings her strong classical background to her dedication to pioneering new music and is regularly sighted in performances that stretch the limits of violin playing often calling for extended techniques, improvisation, and the use of electronics. For over a decade, she has been a frequent collaborator of John Zorn and has recorded twenty albums for TZADIK, of which half are on albums featuring Zorn’s solo and chamber music. She gave the world premiere of his first solo violin work, Goetia, the string quartet, Necronomicon, and various of his works for chamber orchestra. Jennifer works in close collaboration with many composers and has given the US premieres of Helmut Lachenmann’s Toccatina for solo violin, Jacob TV’s Cappriccio, Randall Woolf’s Holding Fast or violin and video, and Wadada Leo Smith’s violin concerto Afrikana 2 to name a few.

A prominent chamber musician, Jennifer has been a member of ensembles as diverse as the Miró String Quartet., ETHEL, Sirius Quartet, The Susie Ibarra Trio, and currently performs regularly with Either Or. She has performed for the Chamber Music Society of Lincoln Center, The Guggenheim Museum, MOMA, Ravinia Festival, Barge Music, Caramoor Music, and worldwide in both classical and chamber jazz settings.

Hailed by critics from the New York Times and the Washington Post, “brilliantly assured” cellist Michael Nicolas is one of the rising stars of his generation and a dynamic performer on the classical and contemporary music scene, in demand as a soloist, chamber musician, recording artist, teacher, and music writer. He captivates audiences across North America, Europe, and Asia with his ravishing tone, refined musicality, and probing interpretations of a wide variety of repertoire.

After graduating from the Juilliard School, Michael was appointed Associate Principal Cellist of the Montreal Symphony Orchestra, with which he played over the course of four seasons, but made the uncommon decision to trade a stable, tenured job for a more flexible and multifaceted career path, and also to dedicate more time and energy to a particular passion of his: the music of the present. Michael is currently a member of the International Contemporary Ensemble (ICE), and has worked with many distinguished composers–Milton Babbitt, Elliott Carter, Mario Davidovsky, Steve Reich, Kaija Saariaho, Charles Wuorinen, John Zorn–as well as countless others of his own generation. His many festival appearances around the world include the Bridgehampton, Chamber Music Northwest, Huddersfield Contemporary Music, Iceland Airwaves, Lincoln Center White Light, Marlboro Music, Mostly Mozart, Ravinia, and Wien Modern festivals.

Michael is also a member of Ensemble Ditto, a chamber music group based in South Korea that has garnered extraordinary success in reaching new and more diverse classical music audiences. They have achieved a massive fan following, selling out concert halls all over Korea and Japan, and have released albums through the Universal Korea label. Of mixed French-Canadian and Taiwanese heritage, Michael was born in Winnipeg, Canada, and currently resides in New York City.

Danielle Eva Schwob and John Zorn performed by Vicky Chow, Jennifer Choi and Michael Nicolas is also part of series of performances supported, in part, with funds from GENERATE: The Frances Richard Fund for Innovative Artists of Promise. GENERATE, instituted in celebration of Roulette’s 35th Anniversary in 2013, aims to provide immediate, practical assistance to artists, helping them achieve ambitious work to be presented in our theater. Click here for more information about how you can contribute to GENERATE.