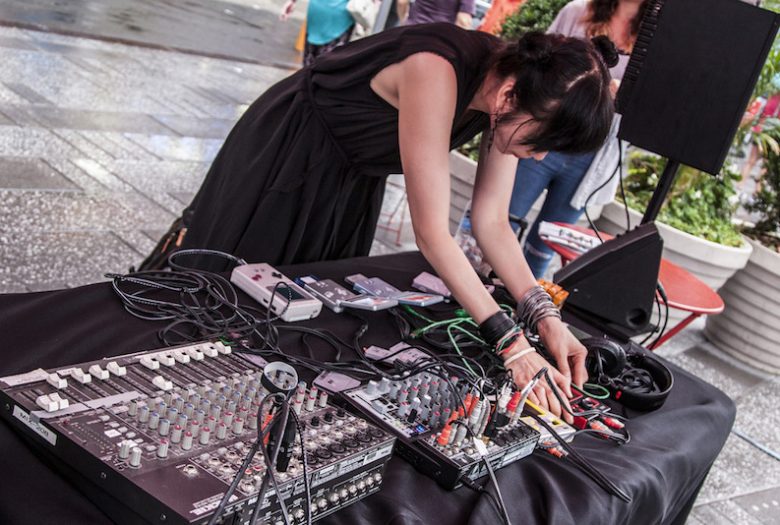 Experimental electronics composer Haeyoung Kim (a.k.a. Bubblyfish) joins forces with the versatile contemporary music pianist Kathleen Supové and video artist Adam Kendall for a performance of Kim’s new piece, Hidden, Lost, Forgotten, for piano, computer, and gameboys, accompanied by live video. The piece is a suite composed of 4 movements, derived from a lullaby that Kim’s parents used to sing for her when she was sick as a child. Based on the rhyme and the gesture of a hand rubbing a child’s stomach, the piece consists of a piano solo, sound collages of voice samples, a piano and gameboy duet, and gameboy improvisation.

Kim creates lo-fi 8-bit sound pieces and minimal electronic compositions. Her work has been presented in various art venues, clubs, festivals, and galleries including The American Museum of the Moving Image, Eyebeam, the New Museum and the Lincoln Center Walter Reed Theater and has been heard on WNYC radio and Spongefork Radio on the web. She is a recent recipient of the Van Lier artist’s residency at Harvestworks media art center. Her work has been featured in Art Forum magazine, on MSNBC and in the NYFA Interactive online magazine. Check out: www.bubblyfish.com

Supové is an award-winning pianist whose concert series, The Exploding Piano, incorporates performance art, staging, and collaboration with artists from other disciplines. She has received grants from Meet The Composer, Mary Flagler Cary Charitable Trust, the Greenwall Foundation, The Aaron Copland Fund for Music, and American Composers Forum, among others and has appeared with The Philip Glass Ensemble, in the Bang On a Can Marathon, at Music at the Anthology, the Bill T. Jones/Arnie Zane Dance Company, Composers’ Collaborative, Inc., and at many other venues, ranging from concert halls to theatrical spaces to clubs.

Adam Kendall is a video-artist based in Brooklyn, NY. He improvises and composes video, drawing from his background in traditional and alternative composition and performance techniques, and he incorporates his computer-programming background by writing Max/MSP/Jitter applications. He
performs regularly in New York City and presents pieces in national and international festivals. His extracurricular activities include co-curating the a/v performance series {R}ake. http://www.hellbender.org

Commissioned by Roulette with support from the Jerome Foundation.