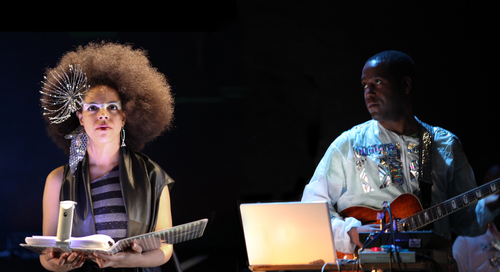 Mendi + Keith Obadike present – Taronda Who Wore White Gloves (radio beta).
This musical narrative is the latest in Mendi + Keith’s series of “opera-masquerades.” Through pop songs and soundscapes this in-progress work tells the story of a reluctant debutante and her peculiar journey through an old rite of passage.

Mendi + Keith Obadike make music, art and literature. Their works include The Sour Thunder, an Internet opera (Bridge Records), Crosstalk : American Speech Music (Bridge Records), a suite of new media artworks, Black.Net.Art Actions (published in re : skin on M.I.T Press), Big House / Disclosure, a 200 hour public sound installation (Northwestern University), and a poetry collection, Armor and Flesh (Lotus Press). Their intermedia work has been commissioned by, exhibited at, and performed at the New Museum, The NY African Film Festival and Electronic Arts Intermix, The Yale Cabaret, Whitechapel Art Gallery (London), The Gene Siskel Film Center, The Studio Museum in Harlem, and The Whitney Museum of Art, among other institutions. Their projects have been featured on New York and Chicago public radio, as well as on Juniradio (104.5) in Berlin. Keith received a BA in Art from North Carolina Central University and an MFA in Sound Design from Yale University. He is an assistant professor in the College of Arts and Communication at William Paterson University. Mendi received a BA in English from Spelman College and a PhD in Literature from Duke University. She was a Cotsen Postdoctoral Fellow at Princeton University and is currently an assistant professor in the Department of Humanities and Media Studies at Pratt Institute. Their current project is Four Electric Ghosts, an opera-masquerade commissioned by the Kitchen (NYC).