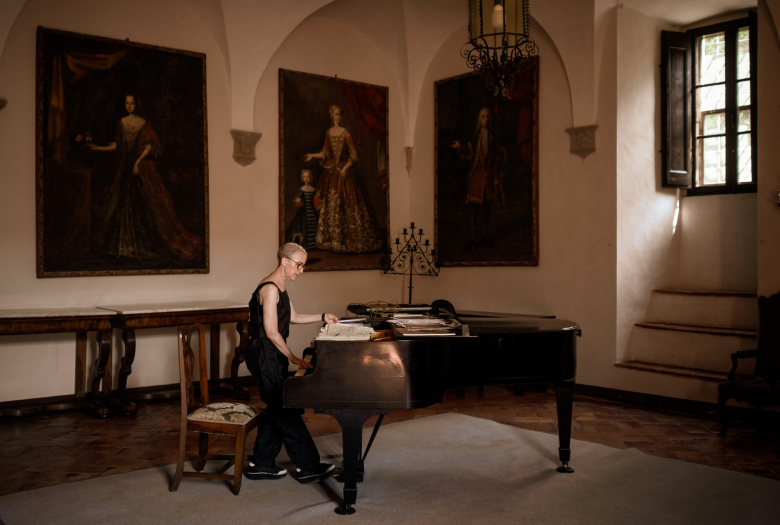 Visionary pianist Myra Melford taps into the elemental nature of inspiration for her exhilarating new project, Fire and Water. The all-star ensemble convenes five of the leading voices in contemporary improvised music: Melford, guitarist Mary Halvorson, saxophonist Ingrid Laubrock, cellist Tomeka Reid, and drummer Susie Ibarra. All five women are innovative composers and bandleaders in their own rights as well as being gifted and venturesome improvisers, providing this ensemble a myriad of pathways to explore. Melford has taken full advantage of these uniquely expansive possibilities, crafting a suite of new music that fluidly traverses the borders between notated composition and guided improvisation.

Fire and Water draws inspiration from Melford’s ongoing engagement with the iconoclastic work of the late visual artist Cy Twombly (1928–2011). The band’s name pays homage to the artist’s “For the Love of Fire and Water,” a series that combines his trademark vibrant scribbles and scrawled calligraphic texts. Melford senses an affinity between her own work and Twombly’s “sense of curiosity and play, and his unbridled energy that just jumps off the page.” That spirit animates the instigative music that she has penned for Fire and Water. The group initially came together for a sold-out performance at The Stone, in June 2019, where, the pianist remembers, “the chemistry was evident right from the first note. I’ve wanted to revisit this constellation of players ever since.”

Guitarist and composer Mary Halvorson has been described as “a singular talent” (Lloyd Sachs, JazzTimes), ”NYC’s least-predictable improviser” (Howard Mandel, City Arts), “one of the most exciting and original guitarists in jazz—or otherwise” (Steve Dollar, Wall Street Journal), and “one of today’s most formidable bandleaders” (Francis Davis, Village Voice). In recent Downbeat Critics Polls Halvorson has been celebrated as guitarist, rising star jazz artist, and rising star composer of the year, and in 2019 she was awarded a MacArthur Fellowship.

Ingrid Laubrock is a saxophonist/composer based in Brooklyn since 2009. Laubrock is interested in exploring the borders between musical realms and creating multi- layered, dense and often evocative sound worlds. Her main projects as a leader are Anti-House, Ubatuba, and Serpentines. Laubrock has performed with Anthony Braxton, Muhal Richard Abrams, Jason Moran, Kris Davis, Tyshawn Sorey, Mary Halvorson, Tom Rainey, Tim Berne, Dave Douglas and many others. She is a prolific composer who has written for ensembles ranging from duo to chamber orchestra.

Described as a “New Jazz Power Source” by The New York Times, cellist and composer Tomeka Reid has emerged as one of the most original, versatile, and curious musicians in Chicago’s bustling jazz and improvised music community over the last decade. Her distinctive melodic sensibility, always rooted in a strong sense of groove, has been featured in many distinguished ensembles over the years.

Susie Ibarra is a Filipina-American composer, percussionist, and sound artist. Her sound has been described as “a sound like no other’s, incorporating the unique percussion and musical approach of her Filipino heritage with her flowing jazz drumset style” (Modern Drummer Magazine) and her compositions are sometimes described as “calling up the movements of the human body; elsewhere it’s a landscape vanishing in the last light, or the path a waterway might trace” (New York Times). Recent commissions include Kronos String Quartet’s 50 for the Future Project Pulsation, PRISM Saxophone Quartet + Percussion’s Procession Along the Aciga Tree, Talking Gong trio with pianist Alex Peh and flautist Claire Chase, film score When the Storm Fades directed by Sean Devlin, and a multimedia game piece Fragility: An Exploration of Polyrhythms for Asia Society.

Since debuting on record as a bandleader in 1990, the pianist, composer, bandleader and University of California, Berkeley, professor Myra Melford has built a discography of more than 25 albums as a leader or co-leader, and has been awarded numerous DownBeat poll placings, a 2000 Fulbright Scholarship, a 2012 Alpert Award in the Arts for Music and, between 2013 – 2016, a Guggenheim Fellowship, the Doris Duke Artist Award and the Doris Duke Residency to Build Demand for the Arts. whom the New Yorker called “a stalwart of the new-jazz movement”—has spent the last three decades making original music that is equally challenging and engaging. She’s explored an array of formats, among them ruminative solo-piano recitals, deeply interactive combos and ambitious multidisciplinary programs, probing the space shared between dynamic small-group jazz and contemporary chamber music. The Other Side of Air, the most recent release by her quintet Snowy Egret, was named one of the best jazz recordings of 2018 by the New York Times and one of NPR Music’s 50 Best Albums of 2018. “This is music with an endless capacity for elasticity and surprise,” NPR wrote, “along with an affirming spirit of coherence.”