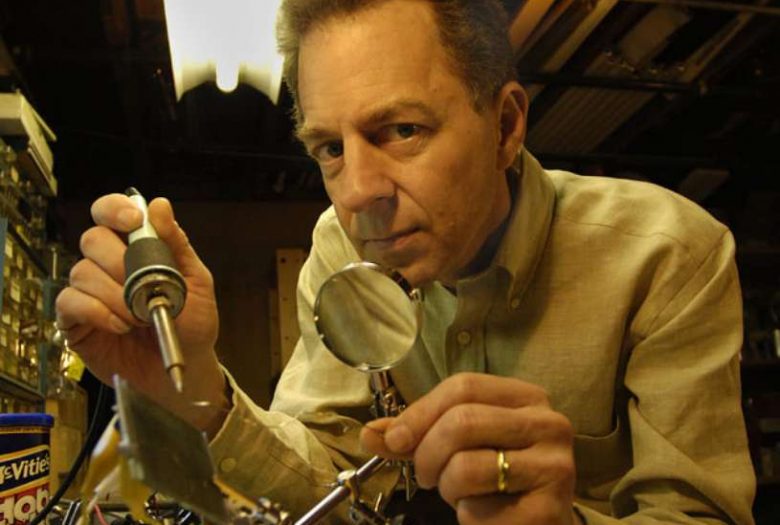 Senseless – Self styled originator of the New Maudlinism will talk your ear off and make your ears buzz, accompanied by his own sweet home-brew electronics and some goodies from STEIM, Amsterdam’s cutting edge musical think tank. With guests Ben Neill. Any questions?

New York born and raised, Nicolas Collins lived most of the 1990s in Europe, where he was Visiting Artistic Director of Stichting STEIM (Amsterdam), and a DAAD composer-in-residence in Berlin. He is editor-in-chief of the Leonardo Music Journal, and a Professor in the Department of Sound at the School of the Art Institute of Chicago. His book, Handmade Electronic Music – The Art of Hardware Hacking (Routledge), has influenced emerging electronic music worldwide. Collins has the dubious distinction of having played at both CBGB and the Concertgebouw. —Bio as of 2019

Composer/performer Ben Neill is the inventor of the mutantrumpet, a hybrid electro-acoustic instrument, and is widely recognized as a musical innovator through his recordings, performances and installations. Neill’s music blends influences from electronic, jazz, and minimalist music, blurring the lines between digital media and acoustic instrument performance. He has been called “a creative composer and genius performer” (Time Out NY),”the mad scientist of dancefloor jazz” (CMJ), and “a musical powerhouse, a serious and individual talent” (Time Out London). A native of North Carolina, Neill is a graduate of Manhattan School of Music. Since 2008 he has been a music professor at Ramapo College of New Jersey. —Bio as of 2019