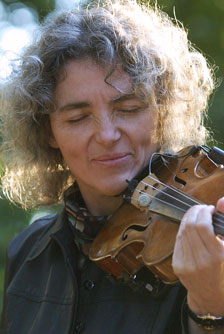 Composing music is a quest in which the composer is trying to realize his/her vision. It’s a challenging process of writing and re-writing. The performer, who is bound by the instructions given to him by the composer, will interpret the written result.  The interpreter’s challenge is to perform the piece on its highest possible level.  In improvised music, composer and interpreter become one person.  The compositional decisions are ad hoc and can’t be changed.  The quest is to react spontaneously to an inner idea or sound from another player, emotions coming from the surrounding space or any other influence and create sensible music from it.  Both distinctly different approaches to music making will come together in this program, Art songs for soprano and piano by Andrew Imbrie, Ned Rorem, Otto Luening and Sergius Kagan will be answered by free improvisations. The musicians are: Rosi Hertlein, soprano and violin, Joe Kubera piano and Joe McPhee reeds.

Violinist and singer Rosi Hertlein divides her devotion between the worlds of classical music, free improvisation and jazz. Her work in recent years includes collaborations with Joe McPhee, Pauline Oliveros, Reggie Workman, Howard Johnson, David Taylor, Vincent Chancey and others. Her acclaimed CD, ROSI HERTLEIN’S IMPROVISING CHAMBER ENSEMBLE (ICE) “Two Letters I’ll Keep” got released in November 2001. She also recorded as special guest on Joe McPhee’s “TRIO X” CD, “Rapture.”   “Rapture is hijacked by the astonishing violinist and singer Rosi Hertlein who is destined for great things.” (Penguin Guide for Jazz CD’s, Fifth Edition) “… Her earlier participation on Trio X’s ‘Rapture,’ another Cadence-funded release offered the impetus for this debut as a leader. The assemblage of New York based players that takes to Hertlein’s challenging and deceptive charts with a concentrative zeal repays the faith in her.”

Hailed by Village Voice critic Kyle Gann as one of “new music’s most valued performers,” Joe Kubera has been recognized as a leading interpreter of contemporary music for the past 30 years. He has been soloist at such festivals as the Berlin Inventionen, the Warsaw Autumn and Prague Spring, Miami’s Subtropics Festival and Berkeley’s Edgefest. He has been pianist in residence at the Ostrava Days New Music Festival since its inception in 2001. Mr. Kubera has been awarded grants through the NEA Solo Recitalist Program and the Foundation for Contemporary Performance Arts, and was a Creative Associate with the Center for the Creative and Performing Arts at SUNY Buffalo in its heyday.

A thoughtful conceptualist, deeply emotional composer and improviser, Joe Mcphee has long championed the creative jazz and new music scene. Appearing on over 70 recordings, Mcphee has collaborated with Peter Brotzmann, Ken Vandermark, Dominic Duval, Evan Parker, Jay Rosen, Jeb Bishop and Mat Maneri among others. He  has earned such accolades as “… his magical take on avant-garde sax remains one of the wonders of the scene. He still has one of the most beautiful tones on the planet, even when he’s reaching for jazz’s outer limits.” – Time Out New York, and continues to set the globe on fire with frequent appearances at major festivals, concert halls and New York City venues.