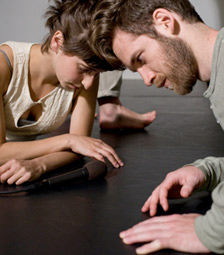 Choreographer/Composer Tatyana Tenenbaum teams up with Dancer/Performer Brandin Steffensen for an afternoon of contemplative soundscapes mixed with absurdist humor.   Using electronics to transform the audience’s voices into a sonic landscape, Tenenbaum will invite the audience to share in a collaborative exploration of loops in time and space.  Steffensen will perform a solo entitled “Nine Nodes (from a chair)” that uses Gertrude Stein’s abstract prose to evoke the King of Pop, Michael Jackson–and ultimately transform into a dinosaur.  The duo will also do a short movement demonstration incorporating volunteer members of the audience.  Come prepared to participate, or simply watch!

Tatyana Tenenbaum is a choreographer and composer whose work explores sound and movement within a shared perceptual framework.  Tatyana loves to bring her unique performance practice to children, and has even produced an intergenerational performance evening “Improvisers Aged 16 to 30” at The Manhattan Children’s Theater.  She is continually growing her personal artistic practice through the integration of intergenerational models of learning and play. Tatyana was a 2010 Fresh Tracks Artist-in-Residence at Dance Theater Workshop (presently New York Live Arts) and the recipient of grants from the Brooklyn Arts Council and the National Foundation for Advancement in the Arts.  Her work has been presented in New York, Chicago, LA, and abroad.  She also performs with Yoshiko Chuma and the School of Hard Knocks and Daria Fain & Robert Kocik’s Phoneme Choir.  She holds dual degrees from Oberlin College & Conservatory in Dance and Music Composition.

Brandin Steffensen is a dance artist based in Brooklyn since 2008.  He currently performs in the works of the lovely Keely Garfield and dances with the Liz Gerring Dance Company.  Before making New York City his home in 2005 he danced for the Ririe Woodbury Dance Company of Salt Lake City and received a BFA in Modern Dance from the University of Utah.  A study of game theory and complexity inform his own latest choreographic ventures.  His pentamodes have been presented at Dance Theater Workshop, The Tank, The New Museum, La Mama and Rooftop Dances.  His work with Deborah Hay and his performances of her News since 2006 have greatly informed his process as does his work with Nancy Stark Smith.  He currently also facilitates practices of Nancy Stark Smith’s Underscore through Underscore NYC.