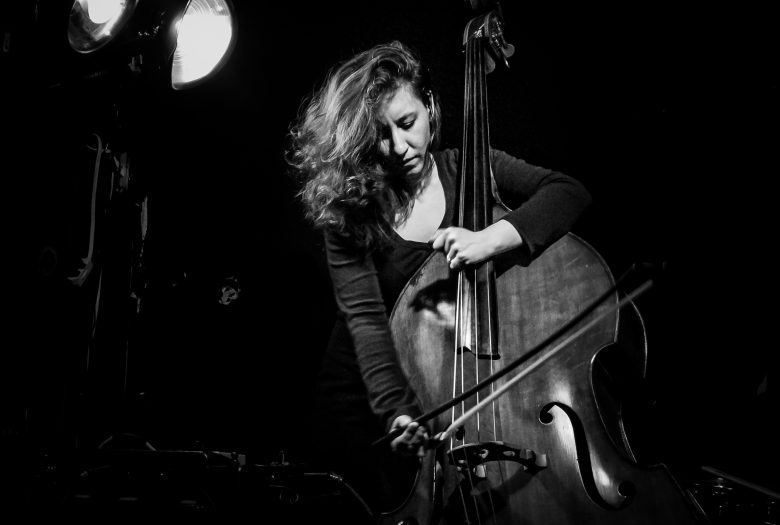 Shayna Dulberger is a 2019 Resident Artist

If a sculpture is the art of making two or three-dimensional representations or abstract forms, then how do we apply that model to the creation of music? Are we able to hear dimensions and listen for different parts similar to the way we can walk around a sculpture and see different parts? Which musician creates stability? Which is peppering the ensemble with colors? Which musicians are syncing up on a psychic level? In every performance, Shayna Dulberger asks the audience to explore what they are watching and listening to.

Inspired by minimalist Anthony Caro’s steel sculpture Bitter Sky (1983), bassist and 2019 Roulette resident artist Shayna Dulberger has invited musicians Fay Victor, Ava Mendoza, and Juan Pablo Carletti to explore sound dimensions through improvisation. Bitter Sky is made of steel with bolts and seams that are very visible: layers and layers of parts with nothing hidden—an obvious parallel to watching a band perform.

Shayna Dulberger has been living and performing in the NYC area since 2003. You can catch her slapping upright bass in her old timey band Nifty Knuckles, rocking out on electric bass in band Chaser and exploring textures and found sounds on tape collages in noise project HOT DATE. Dulberger has appeared on over a dozen recordings mostly in the free jazz genre. She has performed in ensembles led by William Parker, Ras Moshe, Bill Cole, Charles Gayle, Jonathan Moritz and Chris Welcome. She plays electric bass on Cellular Chaos’s record Diamond Teeth Clenched (Skin Graft). Dulberger (b. 1983) is from Mahopac, NY. She attended Manhattan School of Music Preparatory Division in High School and was awarded a Bachelor of Music from Mason Gross School of The Arts Conservatory, Rutgers University where she majored in Jazz Performance. Aside from performing she currently teaches at Brooklyn Conservatory.

Juan Pablo Carletti was born in Buenos Aires, Argentina. He grew up in a musical environment in which his father played percussion, and was instantly drawn to the drums. As he performed with a variety of bands, he focused mainly on improvised music and playing mainstream jazz. He began working with his own projects, and created a small label dedicated to new music. In 2005, Juan traveled to New York City and played with the David Haney Group at Cornelia Street Cafe. This trip was a pivotal turning point in his life, as he met influential musicians such as Mat Maneri, Tony Malaby, Mark Helias, Nasheet Waits and Tom Rainey. One year later, he officially moved to America to continue his musical journey. Juan approaches playing in unique ways, influenced by different styles of music, especially the music created in the avant-garde scene in New York City in the last decades. Using mallets, hands, different sticks and extended techniques on drums, Juan illustrates how drums can be a rhythmic instrument as well as a palette of sounds. His teaching experiences have played a key role in transforming his rhythmic visions. Juan played with Kris Davis, Angelica Sanchez, Michael Attias, Andrew Cyrille, Mat Maneri, William Parker, Rob Brow. Actually he has several groups that he writes music for and other groups that focus on improvisation. These days he is writing pieces for piano and percussion to be recorded soon.

Ava Mendoza is a Brooklyn-based guitarist, singer, songwriter, and composer. Born in 1983, she started performing her own music, and as a sidewoman and collaborator in many different projects, as soon as she was old enough to get into 18+ venues. As a guitarist, Mendoza has received acclaim for her technique and viscerality. Her most ongoing work is as leader of experimental rock band Unnatural Ways, and as a solo performer on guitar/voice. In any context she is committed to bringing expressivity, energy and a wide sonic range to the music. Mendoza has toured throughout the U.S. and Europe and recorded or performed with musicians including Carla Bozulich, Fred Frith, Mick Barr, Nels Cline, Jamaaladeen Tacuma, Mike Watt, Matana Roberts, Ikue Mori, Matt Mitchell, Jon Irabagon, members of Caroliner, the Violent Femmes, and more. Recordings are available on labels Tzadik, Weird Forest, Clean Feed, NotTwo, Resipiscent, and New Atlantis.

Friendly critics have quoted: “It’s Ava Mendoza’s deconstructing of blues and punk into brutal shredfests that’s causing a ruckus in NYC’s DIY hubs” (Brad Cohan, Noisey | Vice). “A wizard on a semi-circle of effects pedals, but… equally adept with FX-less technique,” (Lars Gotrich, NPR). She was featured as one of Guitar World‘s “10 Female Guitarists You Should Know”.

Shayna Dulberger: Bitter Sky is made possible, in part, by the Jerome Foundation.