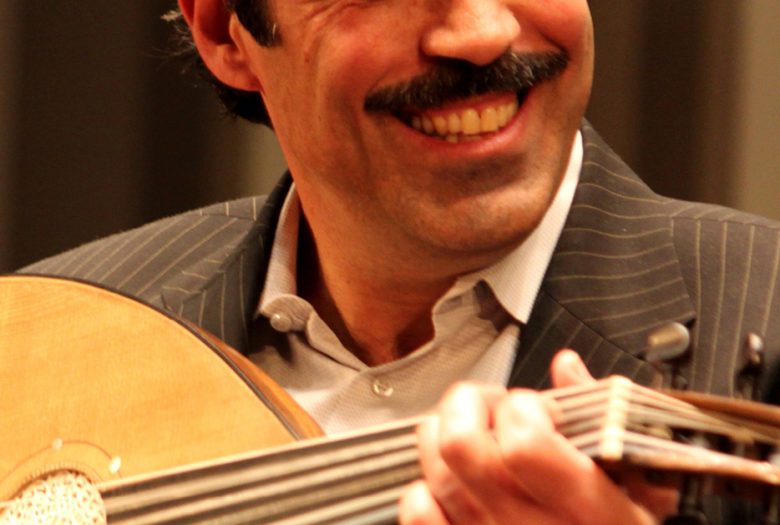 Simon Shaheen performs works from the classical Arab repertoire – traditional and contemporary pieces from the Levant and Egypt. The music is composed in the traditional maqam, a modal form that utilizes microtonal intervals and requires considerable improvisational skill. It is melismatic, often deeply meditational and virtuosic. He is joined by the exquisite Lebanese vocalist Rima Khcheich in a program encompassing music from the ancient courts of Al-Andalus to songs from the 1940s and ‘50s Egypt and Lebanon by such composers as Mohamed Abdel Wahab, the Rahbani Brothers, and Zakariyya Ahmad.

Simon Shaheen is acknowledged as one of the world’s finest exponents of the Arab ‘ud (short-necked unfretted lute). Born in a small Palestinian village he studied initially with his father Hikmet, a renowned teacher of Arab music. Later Shaheen studied Western music in the U.S. His mastery of both the Eastern and Western violin styles is unparalleled and he is a master of improvisation. He has become an icon in the U.S. and is a major force in the promotion of Arab music. Shaheen has toured as a soloist and with various ensembles throughout the world. He is the founder of the Arabic Music Retreat, an annual event held in New England, which brings together the finest educators, performers, and students of Arab music for intensive study and performance.
simonshaheen.com

Rima Khcheich, from Lebanon is fast becoming one of the most sought after singers of classical Arab songs.  She is acknowledged both for the exquisite beauty of her voice and her profound knowledge of both traditional and modern Arab repertoire. She has performed with Simon Shaheen on many occasions in the U.S. and Lebanon.
rimakhcheich.com

The Nava Ensemble, featuring Amir Nojan (setar – plucked lute), Taghi(vocals) and Sina Dehghani ( tonbak – goblet drum, daf – frame drum) perform a program of sung poetry and instrumental music in the classical Persian tradition. As with most Asian and Middle Eastern music, there is a close link between music and poetry. At times, when the Persian language and identity were under assault (as during the Mongol invasion), it was poetry that kept the culture alive. With religious proscriptions against music and dance at various times, the culture was often maintained through poetry because of its connection to Sufism, the mystical branch of Islam that plays such an important part in the lives of the Iranian people. Instrumental music is nearly always performed as part of a suite that includes sung poetry. Improvisation is an essential part of any performance, and the musicians draw on their experience and mastery of technique to convey the emotions described by the song texts while adding their personal interpretations. The performance is shaped by the musicians’ knowledge and the sensitivity and mood of the audience. The songs are drawn from a rich history of mystical poetry that ranges from 11th- to 14th-century poets such as Babar Taher, Nizami, Rumi (Molavi), Hafez, Sa’adi, and more modern poets of the 17th to 20th centuries.

Born in the Turkish city of Adana to a musical family, Omar Faruk Tekbilek is a brilliant interpreter of Sufi, folk and contemporary music of the Middle East. An evocative vocalist and virtuoso on several instruments, including the ney (bamboo flute) and baglama (long-necked lute), he has has been a major force in world music since the 1970s. His collaborations have included composer/producer Brian Keane,  trumpeter Don Cherry, master percussionist Arto Tuncboyaciyan and ‘ud and violin virtuoso Simon Shaheen.

Murat Tekbilek has been the lead percussionist in his father’s ensembles for a decade and has performed throughout the world. His instruments include darbuka (goblet drum), def and bendir (frame drums).