Svjetlana Bukvich: EVOLUTION and other stories 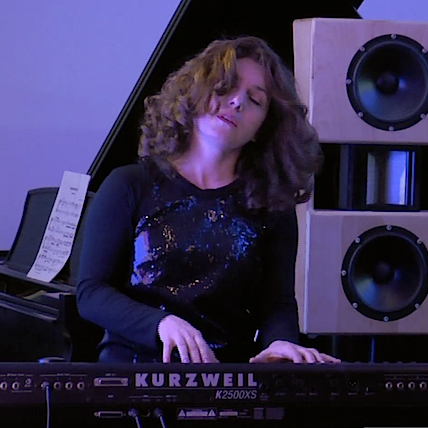 Svjetlana Bukvich: EVOLUTION and other stories

Bosnian-New Yorker Svjetlana Bukvich (minimoog, piano, voice) brings her signature sound to Roulette in a boundary-defying set featuring compositions from EVOLUTION, her recent release on PARMA’s Big Round Records. Electric guitars, synthesizers, strings, voices, and tuning of her design tell stories through one-of-a-kind exploits in intonation, timbre, and rhythm, along with new media works that feature opera mixed with “all manners of noise” (The Star-Ledger).

Bukvich has appeared in venues as varied as the The Kennedy Center, the Tribeca Film Festival, The Kitchen, Music with a View festival, Serial Underground at the Cornelia Street Café, Composers Concordance Festival, Lincoln Center, (le) Poisson Rouge, ASCAP’s Thru The Walls Series, the [New York] Times Center, the Bohemian Hall, and internationally including Beijing, London, South Africa, and Copenhagen. Along with twenty-four groundbreaking contemporary women composers, Bukvich is featured in the recently released book In Her Own Words – Conversations with Composers in the United States.

She was artist-in-residence at Lafayette College (2011- 2012), and has collaborated with Pomegranate Arts in New York in support of Goran Bregovic and his Wedding and Funeral Orchestra’s North American tour. Her score Interior Designs, commissioned by the Carolyn Dorfman Dance Company, was listed as one of the top ten dance events of 2013 (The Star-Ledger) and has received the New Music USA, 2013 Live Music for Dance award. Her album EVOLUTION, “astounding”, “mind expanding” (babysue), mixed by the Grammy-award winning team David Frost and Tom Lazarus, was released in April 2014 on PARMA’s Big Round Records.

Bukvich is on faculty at NYU, and is a 2013 New York Foundation for the Arts Fellow in Music/Sound. www.svjetlanamusic.com

Svjetlana Bukvich: Works from EVOLUTION and other stories is made possible, in part, with funds from GENERATE: The Frances Richard Fund for Innovative Artists of Promise. GENERATE, instituted in celebration of Roulette’s 35th Anniversary in 2013, aims to provide immediate, practical assistance to artists, helping them achieve ambitious work to be presented in our theater. For more information about how you can contribute to GENERATE, please contact us at (917) 512-2474 or visit https://roulette.org/support/generate/.