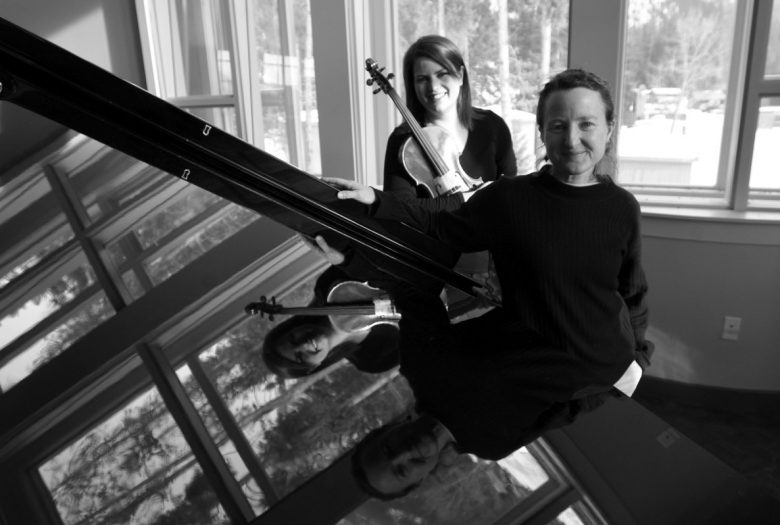 The duo of violist Tanya Kalmanovitch and pianist Myra Melford came together by accident. Both were performing separately at the 2003 Guelph International Jazz Festival, but when circumstances prevented Kalmanovitch’s quartet performance, the festival’s artistic director Ajay Heble suggest a duet with Melford. Never having played together before, they decided to improvise freely, using a few simple frameworks discussed before they went on stage. An inspired concert
resulted from this serendipitous encounter. In early 2005, the Canadian violist and American pianist recorded their debut CD “Heart Mountain” (Perspicacity, 2007).

A convergence of musical interests and a shared commitment to close listening makes this a magically complementary pairing. Both musicians turned to jazz and improvised music after studying Western classical music. Kalmanovitch holds a degree from The Juilliard School, but was attracted to improvisation since she was a teenager auditing jazz workshops led by Dave Liebman, Dave Holland, Muhal Richard Abrams and others at the Banff Centre for the Arts in her native Alberta. Returning to New York in 2004 after extended stays in Alberta, India and Ireland, she quickly made her mark on the city’s improvised music scene, named as “best new talent” that year by All About Jazz – New York.

Melford studied classical music as a child and jazz as an undergraduate, then moved to New York where she established herself as a composer and bandleader with her trio, and bands such as The Same River, Twice; Crush; and The Tent. As a composer, Melford has been
noted for a “commitment to refreshing, often surprising uses of melody, harmony and ensemble playing.” As a bandleader, she’s demonstrated a “career-long knack of choosing players who make smaller ensembles sound full and intricate as an orchestra” (Reuben Jackson, NPR).

Kalmanovitch and Melford also share interests in the music of India. Melford studied harmonium in northern India in 2000-01. In 2003- 4, Kalmanovitch studied South India’s Karnatic music in Chennai as part of her research for a Ph.D. in ethnomusicology.

Melford and Kalmanovitch draw on their respective backgrounds to create improvised duets with an entirely original vocabulary. Their spontaneous compositions possess formal elegance infused with the urgency of improvisation. Each piece builds from an initial idea, reworked and extended with lyrical economy and intense focus. They perform complex melodic counterpoint in one piece, then explore timbre and texture in the next. They exchange roles effortlessly, moving
seamlessly between leader and accompanist. Theirs is a carefully balanced music, with close attention to dynamics, inflection, and phrasing. It is a multi-faceted conversation between equals that depends on an intimate chemistry, intuitive responses, and conscious manipulation of form.